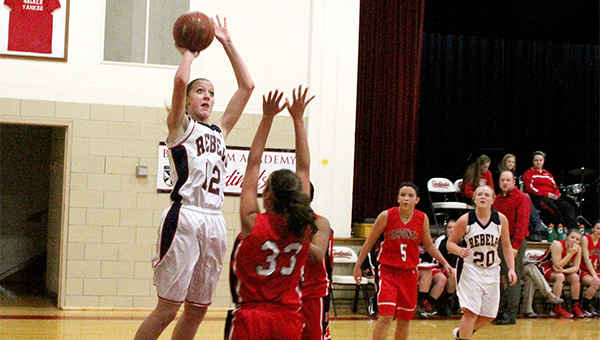 Anissa Janzig of United South Central shoots over Mya Johnson of Bethlehem Academy Tuesday in Faribault. Janzig had a double-double with 24 points and 11 rebounds in the Rebels’ win. — Submitted

The Rebels took revenge with a 69-43 road win Tuesday in Faribault. 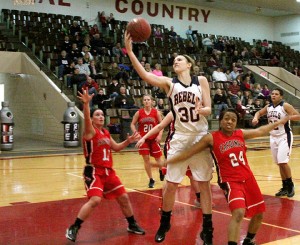 This year, the Rebels jumped to a double-digit halftime advantage (30-20) with strong play in the paint.

“We’re doing a really good job in our transition game, and if our perimeter players don’t have a shot, they’re getting it inside,” said USC head coach Stu Hendrickson. “That’s been a strong part of our game in the last few weeks.”

Anissa Janzig led the Rebels with a double-double: 24 points and 11 rebounds. Shianne Robertson and Lauren Allis helped Janzig down low and combined with 24 points and 18 rebounds.

The Rebels (8-3 overall, 2-2 Gopher Conference) are off to their second-best start in 10 years. The only year USC posted a better record through the first 11 games was two years ago, when the Rebels started 9-2.

USC is on a five-game winning streak, dating back to a Dec. 28 loss to Jackson County Central 50-49 at the St. Clair tournament.

Bethlehem Academy (0-11 overall, 0-4 Gopher Conference), on the other hand, has been in a free fall since taking third place at the Class A girls’ basketball state tournament last year.