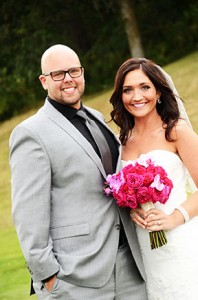 The bride is the daughter of Steve and Lori Wagner of Albert Lea. Grandparents are Bev and Ben Cordes, Harry Steenblock and the late Phylis and Archie Wagner.

The groom is the son of Greg and Linda Larson of Albert Lea. Grandparents are Maynard and Beverly Bidne and Helen Larson and the late Orlan Larson.

Best man was Mike Bakken, brother of the groom. Groomsmen were Josh Quinlivan, Jason Gordon, Blaine Swenson, Josh Kasper and Brett Hanson, all friends of the groom, and Jeri Wagner and Chris Wagner, brothers of the bride. Ring bearer was Asher Hanson, son of Brett Hanson and Danielle Weso.

Personal attendants were Lisa George, cousin of the groom, and Lyndsey Smith, friend of the bride.

Gift and program attendant was Madison Meyer, niece of the groom.

The bride is a 2002 graduate of Albert Lea High School and 2006 graduate of the University of Minnesota. She is employed at Housing Solutions.

The groom is a 2002 graduate of Albert Lea High School and a 2010 graduate of Minneapolis Community & Technical College in graphic design. He is self employed as the owner of Creative Color.

A trip to Maya, Mexico, was taken following the wedding.