When Albert Lea police knocked on the door Friday night at 802 18th St., a man answered who had a filet knife in his upper chest.

An Albert Lea woman was charged in Freeborn County District Court on Tuesday with stabbing the man.

Diana Applegate, 54, faces one count of second-degree assault with a dangerous weapon tied to the alleged stabbing Friday night at 802 18th St. 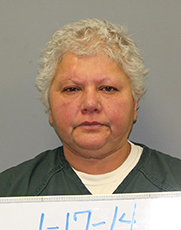 Court documents state about three inches of the blade was exposed. They did not indicate the full length of the blade other than to describe it as “a long and skinny knife.”

The man told police Applegate allegedly had stabbed him in an argument about vodka, according to reports. His T-shirt was soaked in blood, and he was taken to the emergency room at Mayo Clinic Health System in Albert Lea. Court files said the knife fell out while he was in the emergency room and was not removed by hospital staff.

Assistant Freeborn County Attorney David Walker said the man’s injuries did not appear to be life-threatening though he has not seen the full reports from the hospital.

Both the man and the woman called police to report the incident.

Freeborn County District Court Judge Steve Schwab ordered Applegate be released on her promise to appear for her next court hearing. She agreed to a series of conditions, including having no contact with the alleged victim. Her next court hearing is slated for Jan. 30.