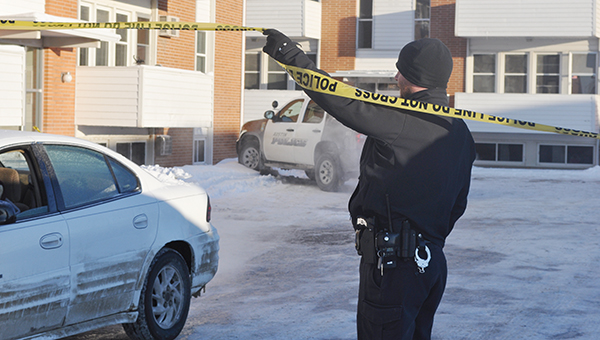 Officer Mark Walski lifts police tape to let a car leave the lot of Park Place Commons at 201 11th Ave. NW Monday morning. The Austin Police Department had been on scene since Sunday night, as a man had barricaded himself inside an apartment unit. — Trey Mewes/Albert Lea Tribune

AUSTIN — Austin police took a 47-year-old man into custody shortly before 10 a.m. Monday after a standoff at Park Place Commons apartments that lasted more than 13 hours.

Steven Fritz was taken to the Mower County jail on an Olmsted County warrant, according to Police Chief Brian Krueger.

Krueger said police were called to an apartment unit at the 204 building of Park Place, at 201 11th St. NW, at about 8:30 p.m. Sunday night on a call Fritz may pose a danger to himself and others. Police were told Fritz also may have a gun.

Officers evacuated residents in nearby apartments and cordoned off the building.

They let several people come in and out of a police cordon around the building Monday morning as residents prepared for work and school.

Officers entered Fritz’s apartment and took him into custody without incident at 9:48 a.m.

Police recovered four handguns from the apartment. Fritz hasn’t received local charges yet, but an Olmsted County warrant for his arrest was issued with no bail.