Albert Lea boy captures the heart of looker from Minneapolis 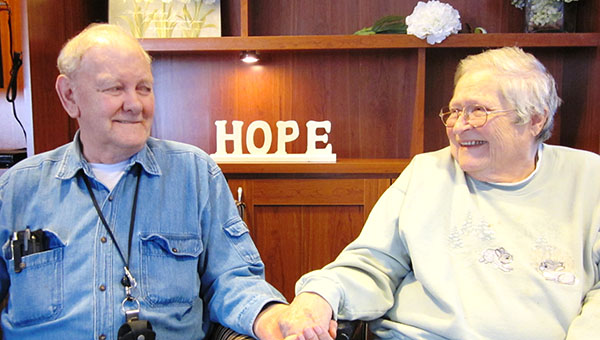 Bob and Barb Christopherson have been married for 59 years and currently reside at Good Samaritan Society in Albert Lea. — Submitted

Bob and Barb Christopherson have been married for 59 years, but Bob still says his wife is the prettiest girl he has ever seen.

To this day, nothing can keep this couple apart.

Barb came to live at Good Samaritan Society in 2009 after suffering from a stroke. The rain, snow sleet and hail didn’t stop Bob from visiting her every day. Bob eventually decided he did not want to be separated from Barb and was admitted into the facility in 2012. 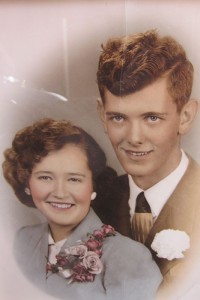 Bob and Barb Christopherson were married on Jan. 8, 1955.

“I missed her! Plus I was getting sick of eating my own cooking,” Bob said.

The couple now spends their days enjoying live entertainment at Good Samaritan and socializing with friends.

Bob and Barb met when they were in eighth grade. Barb lived in

Minneapolis but often went to Albert Lea to visit her cousin.

Bob, who was born in Albert Lea, received a job working for Barb’s uncle on their mink farm.

Bob and the guys were taking a break from work one day with a game of softball. Barb’s cousin pointed Bob out and asked Barb if she thought he was cute. “I’ve seen better,” Barb said.

The couple dated long distance before getting married. They eloped to Northwood and were married on Jan. 8, 1955, in a private ceremony. Just three days later, Bob shipped off for the Army while Barb stayed behind to finish school.

“I didn’t think a pretty girl like that would be waiting for me,” Bob said.

When Bob returned they were ready to start a life together. They spent their days traveling, fishing, camping, dancing at a live Lawrence Welk concert and spending time together. They had five children and lived in Missouri and Colorado before settling in Albert Lea. Bob worked for Wilson & Co. and Barb ran her own day care. Barb looks back on those memories with a smile.

Bob said he still remembers coming home after a long day, sitting down and having a day care child cover him up with a doll blanket.

When the couple was asked how they made their 59-year-marriage successful, they paused before responding.

“We’ve had our ups and downs like everyone else, but nothing that would ever make us not want to be together,” Bob said.

Today Bob and Barb are the social butterflies of Good Samaritan Society of Albert Lea. They are often visiting friends, shopping, listening to live music or holding hands sharing a soda and cookies.