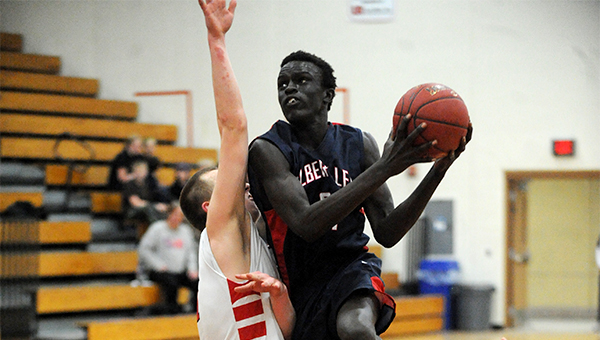 Dedoch Chan of Albert Lea drives to the basket during the second half Monday against Mankato West. The Tigers fell in double overtime. — Micah Bader/Albert Lea Tribune

At the opening tip, the Albert Lea boys’ basketball team had half as many wins as Mankato West. But the Tigers gave the Scarlets all they could handle.

Mankato East snuck away with an 83-76 double overtime win Monday at Albert Lea.

“I’m so proud of this team, but we’re not satisfied,” said Albert Lea head coach Lucas Kreuscher. “Our guys know they can compete with anybody, and we keep getting better.”

The Tigers jumped out to a 15-12 lead early in the first half. Mankato West countered by going on a 20-6 run to take a double-digit lead.

However, Albert Lea fought back from behind the perimeter. Tesloch Kuey drilled a pair of 3-pointers and another trey by Tyler Vandenheuvel tied the game at 34. The Tigers had the momentum, and they capped a 21-4 run 12 seconds before the halftime buzzer with a runner in the lane by Kuey.

“I thought we did a nice job from about the 10-minute mark in the first half on,” Kreuscher said. “It starts with getting the ball inside and that opens up the shots outside.”

In the second half, Albert Lea extended its lead to nine points with another 3-pointer by Kuey at the 9-minute mark. From that point on, Mankato West chipped away. The Scarlets tied the game at 57 with 4 minutes and 35 seconds left. A minute later, they took their first lead of the second half.

However, Albert Lea fought back again. Cole Keyeski buried two free throws to give the Tigers a 59-58 lead with 3 minutes and 28 seconds left. Mankato West took a 60-59 lead and stalled for about a minute and a half. The tactic backfired when Jakob Kilby stole the ball and found Vandenheuvel who hit a 3-pointer on the other end to give Albert Lea a 62-60 lead with 58 seconds left.

Mankato West tied the game, and Albert Lea had two chances to score but couldn’t convert at the end of regulation.

In overtime, the Scarlets led by as many as four points, but Albert Lea forced double overtime with two banked-in 3-pointers inside of 1 minute. The first was by Cody Scherff; the second by Vandenheuvel.

In the second overtime, the Tigers had a chance to tie the game with 6 seconds left, but they turned the ball over.

After weather wreaked havoc on the Tigers practice schedule, Kreuscher said he’s happy to get back to work.

“We’ve got a rare three days of practice and our confidence will continue to grow,” Kreuscher said. “I know how these guys will respond.” 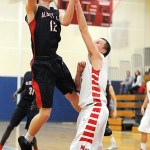 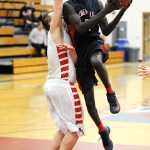 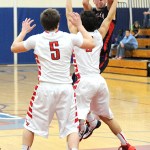 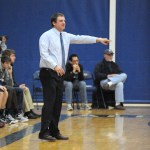 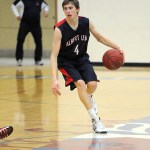