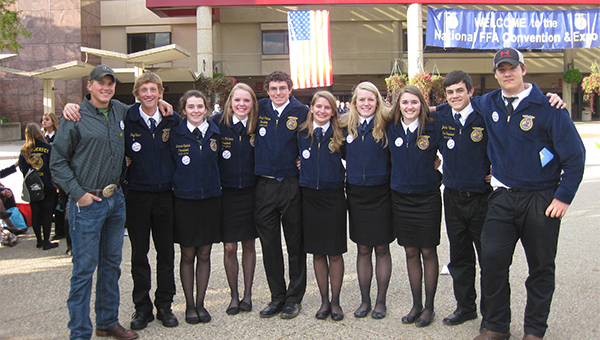 With it being FFA week, Brianna Opdahl has her hands full. Not only is the Albert Lea High School junior president of the chapter, she is just a received a spot at the FFA region office.

“I’m excited but nervous,” Opdahl said before the election.

Opdahl interviewed for the position and was elected Minn. Region VII Sentinel on Friday.

Opdahl, a resident of Alden, grew up on a farm. She has been in FFA since her freshman year and enjoys it because it allows her to prepare for a future in farming.

“My sister was vice president of the region office,” Opdahl said. “She inspires me and continues to help me strive to improve.”

Opdahl will be representing eight chapters that make up the region. Fifteen people ran but only eight were selected to serve.

Opdahl hopes that her positivity and willingness to work with others will help her perform well in the position.

The chapter has events planned this week to educate the public about agriculture. There will be FFA trivia on Tiger Vision, the school TV channel. There also will be a teacher’s breakfast, a dress-up day and an interview with a local radio station.

Founded in 1928, the Future Farmers of America brought together students, teachers and agribusiness to solidify support for agricultural education. In Kansas City’s Baltimore Hotel, 33 young farm boys charted a course for the future. They could not have forseen how the organization would grow and thrive.

Since 1928, millions of agriculture students have donned the official FFA jacket and championed the FFA creed. FFA has opened its doors and its arms to minorities and women, ensuring that all students could reap the benefits of agricultural education.

Today, the national FFA organization remains committed to the individual student, providing a path to achievement in premier leadership, personal growth and career success through agricultural education according to the website.

Now, the organization is expanding the nation’s view of “traditional” agriculture and finding new ways to infuse agriculture into the classroom.

“It is a way to take pride in the future generation who will grow the food that we need,” said FFA adviser Kim Meyer. He has been an agriculture and industrial technology teacher at Albert Lea High School since 1988.

Albert Lea High School FFA meets once a month. They have done well in competitions with their small animal, horse judging and general livestock teams going to state.