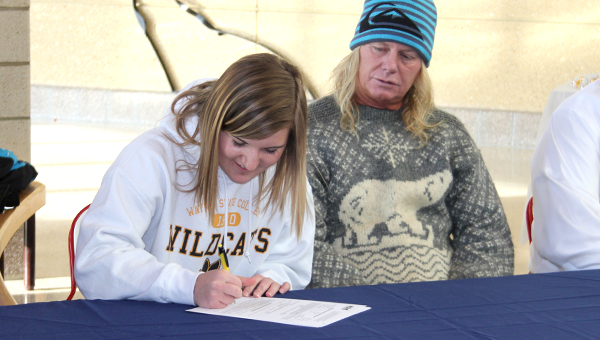 Albert Lea’s All-State honorable mention midfielder is headed to Wayne, Neb. next fall for higher learning and to continue her soccer career.

Hanson also visited Augustana College in Sioux Falls, S.D., and turned down an offer to play soccer from Southwest Minnesota State University in Marshall. Wayne State was her first choice.

“I really liked the campus and everything about it,” Hanson said.

Hanson’s parents, Jenny and Darren Hanson, supported her through their attendance on national signing day and during her search for the right school.

“They were open to look anywhere,” Hanson said. “They knew that I wanted to go to a smaller school, and I wanted to play soccer at a high level.”

According to Wayne State’s official website, www.wsc.edu, the college’s student population in 2013 was 3,558, which is about 150 fewer than Southwest Minnesota State’s enrollment.

Barnhill said he coached at the college level for seven years and Hanson has a plethora of skills that will translate to the next level.

“She has good presence and good awareness. Reading the game is the primary thing,” he said. She’s also good at receiving, shooting, passing and all the technical skills. That’s what you need because now you’re moving into a pool of players who all have those abilities. The competition gets ramped up.”

Wayne State will look to improve on last season’s 2-14-2 overall record. The Wildcats are hoping to boost their offensive output in 2014 after scoring one goal or fewer in 16 of 18 games during Tom Cliff’s first year as head coach.

To earn her spot on the pitch, Hanson will need to complete rehab after playing last season without an anterior cruciate ligament (ACL) in her knee and having surgery after the season.

“So far, so good,” Hanson said about the healing process. “I haven’t gotten to do anything too exciting yet. No running, so it’s pretty boring. But we’re getting there.”

Hanson said she will major in Spanish education.