Cause of Hollandale fire undetermined 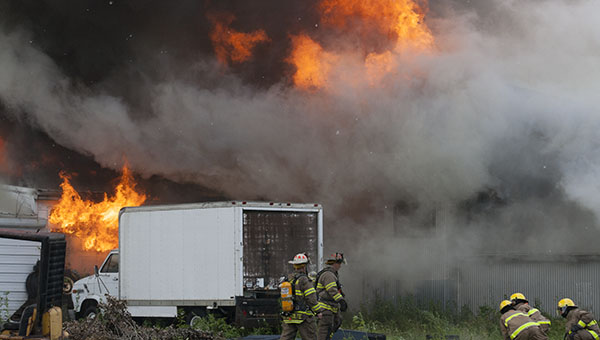 Firefighters from more than 20
departments
respond July 8, 2013, to a blaze in Hollandale. — Sarah Stultz/Albert Lea Tribune

The State Fire Marshal’s Office concluded its report this week into the large fire that destroyed three warehouses in Hollandale last July.

The report, by investigator Steve Kellen, states investigators were unable to to determine the cause and origin of the fire because of the extent of flame and heat damage of electrical items and because the owners destroyed the remaining structure prior to the final scene examination. The cause is listed as undetermined.

Kellen, a deputy state fire marshal, said he could not, however, eliminate an electrical malfunction as a possible cause and noted that one of the building’s renters said he had noticed a computer power strip had not been working properly.

Firefighters from at least 20 departments both in and outside of Freeborn County battled the blaze July 8 at 101 Netherlands Ave. W. for more than eight hours in hot, humid conditions.

The warehouses, which used to be part of a potato company, are owned by Don and Irene Jones. They rented out one of the buildings, where the fire is believed to have started, to CF Distributing, owned by Craig Ferns of Hollandale. The building housed motorcycle and lawn mower parts for an online business.

The report states firefighters did not attack the blaze from the inside of the structure because of the high number of items stored inside and the dangerous conditions.

The blaze spread from Ferns’ building to two other warehouses that stored antique vehicles and other collectibles owned by Jones and her husband. There were 15 antique cars, including two Ford Model Ts, and about 30 antique chainsaws, among other items.

Nobody had been inside Ferns’ building since the night before the fire began.