ST. PAUL — Minnesota Gov. Mark Dayton on Tuesday named Tina Flint Smith as his running mate in pursuit of a second term, discarding the traditional strategy of geographic balance on a ticket in favor of an alliance with a trusted first-term adviser.

Dayton credited Smith, as his chief of staff, with helping push through free all-day kindergarten, increasing financial aid for college students and getting legislative approval for the massive Destination Medical Center development around Rochester’s Mayo Clinic. He said she took a lead role in steering Vikings stadium legislation. He called her “the best administrator with whom I have ever worked.”

In her position, Smith has worked to build ties to the state’s business community, winning accolades among executives sometimes skeptical of Dayton’s policies. Smith’s shift from a behind-the-scenes player to an active campaigner gives Dayton a teammate to help him fundraise and travel the state, which she’ll begin this month.

“The campaign for an even better Minnesota starts today. The choice voters have is going to be one of the most important they have in the next decade,” Smith said at a union hall rally near the Capitol. She played to her audience, promoting an increase in the minimum wage as the AFL-CIO has advocated.

Smith, 55, will leave her chief of staff role next month and shift into a role as campaigner. Dayton immediately promoted Smith’s deputy, Jaime Tincher, to chief of staff. Smith said she intends to remain on the development board for the Mayo Clinic project.

Smith steps in for Lt. Gov. Yvonne Prettner Solon, who recently announced she has no interest in serving a second term.

Prettner Solon is from Duluth, and her selection in 2010 was due in part to Dayton’s pursuit of northern Minnesota votes. 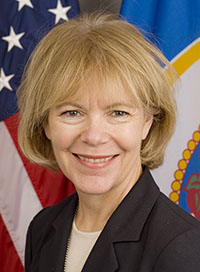 Dayton and Smith have called Minneapolis home — though the governor lives full-time at the official executive residence in St. Paul — and conservatives in attendance at Dayton’s announcement immediately blasted the all-Minneapolis team.

Republicans are unlikely to settle on a ticket before August, with several candidates seeking the chance to take on Dayton.

“For 37 years I’ve been traveling around the state. I’ve traveled more miles around the state than any other politician in the state right now,” Dayton said. “The way I see it is, I live in Minnesota. The same could be said for Tina.”

Smith’s roots run deep in Minnesota politics. She counts Walter Mondale among her past bosses, and was chief of staff for Minneapolis Mayor R.T. Rybak before joining Dayton’s team. Her fundraising rolodex is large, a potential boost for Dayton who has never reveled in the task.

She also has a strong pro-abortion rights background, serving as a top official for Planned Parenthood of Minnesota, North Dakota and South Dakota.

Originally from New Mexico, She holds a bachelor’s degree in political science from Stanford and earned a master’s in business from Dartmouth.

Dayton said he considered a couple of other running mate options but didn’t offer the role to anyone else.