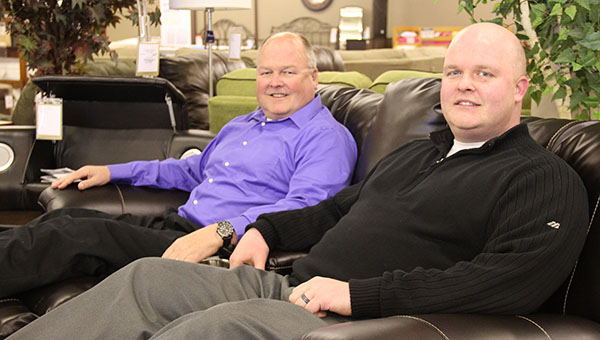 David Janisch, left, and his son, Adam Janisch, sit on chairs at their Slumberland store in Albert Lea. They purchased the business and its building in December. –Tim Engstrom/Albert Lea Tribune

The Slumberland franchise in Albert Lea has new owners.

David Janisch of Eagan and his son, Adam Janisch of Apple Valley, took over Dec. 1 and also bought the building at 2720 Bridge Ave. Verizon and Sears stores rent from them.

The Janisches bought the store and building on a contract for deed from Bill Volgelgesang. They declined to say the price tag.

With 128 stores in 11 states, Slumberland is the largest furniture retailer in the Midwest.

Adam Janisch said he and his family plan to move to Albert Lea. He and his father already have redesigned the floor plan. Customers will notice new paint along the walls. They will find bedroom sets near the door, with recliners now farther in.

Adam said he wants the store to have a “a homier feel.” They hope to have vignettes to show customers how the furniture would look in their house. His father said their goal is to bring the store in line with the standard look and feel of most Slumberland outlets.

“It will look like as if they just walked into a store in the Cities,” David said.

David is a former owner of the Golf America store in the Twin Cities. He owned it from 1989 to 2003. It now no longer exists, as the Internet has altered the purchase of golf equipment. He is a sales associate for five corporate stores, and Adam is a store manager at the Inver Grove Heights store.

Adam said customers can expect to see new lights in the store and a new sign out front in coming months.