Ashley Ferry and Matthew Mosser, both of Clarks Grove, were married at 3:30 p.m. Sept. 7, 2013, at Wedgewood Cove Golf Club in Albert Lea. The Rev. Sarah Solyntjes, friend of the groom, officiated the double-ring ceremony.

The bride is the daughter of Robert and Delores Ferry of Waseca. 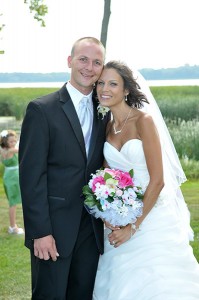 The groom is the son of Diana Johnson of Albert Lea.

The groom’s grandparent is Barb Trow of Albert Lea.

Personal attendant was Barbara Mosser, sister of the groom.

Junior bridesmaids were Madison Mosser, daughter of the groom, and Grace Johnson, niece of the bride.

The flower girl was Sophia Paulson, cousin of the groom, and Natalie Johnson, niece of the bride.

Junior groomsmen were Emmett Johnson, nephew of the bride, and Sam Paulson, cousin of the groom.

Ring bearer was Brayden Miller, nephew of the groom.

A reception was at Wedgewood Cove Golf Club.

The honeymoon was to Riviera Zone of Cancun.