James Robert “Bob” Lorenz, 92, of Wells died Monday, Feb. 10, 2014, at Minnesota Veterans Home in Luverne. A Mass of Christian burial will be at 10:30 a.m. Thursday at St. Casimir Catholic Church in Wells. Visitation will be from 5 to 8 p.m. Wednesday at Bruss-Heitner Funeral Home in Wells, with a prayer service at 8 p.m. Visitation will continue one hour prior to the service at the church on Thursday. The Rev. Eugene Stenzel will officiate, and interment will be in St. Casimir Catholic Cemetery in Wells. Military honors will be accorded by the Wells Color Guard. Please see www.brussheitner.com to leave online condolences. Bruss-Heitner Funeral Home in Wells is in charge of arrangements. 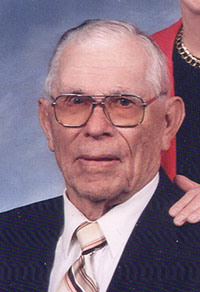 James Robert Lorenz was born March 7, 1921, to Ernest Eugene and Ida (Curtice) Lorenz in Garden City, S.D. He worked as a blacksmith until entering the U.S. Army. James served during World War II in the 2nd Battalion-145th Infantry. He received the Purple Heart, American Theater Service Medal, Pacific Theater Medal and the Philippine Liberation Medal with two Bronze Stars. Due to the tornado in Wells that destroyed St. Casimir Catholic Church, James married Adeline A. Stenzel in Minnesota Lake on Aug. 27, 1946. James farmed for many years and obtained his boiler’s license and worked at Del Monte in Wells until his retirement. He loved to play cards and dance — he often said he’d rather dance than eat. James loved and enjoyed his family. He was a member of the Wells VFW, DAV and St. Casimir Catholic Church.

He was preceded in death by his parents; two brothers, Phil and Don; two sisters, Margaret and Evelyn; grandson Dominic Ceccoli.