Jerry Kaphers is not an ordinary assistant coach 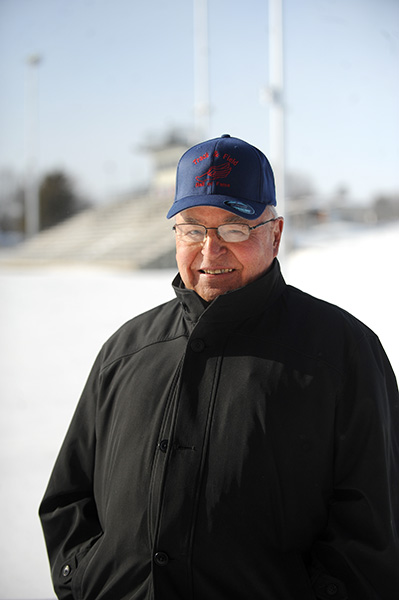 Jerry Kaphers, a volunteer assistant with the Albert Lea track and field team, stands Friday on the east side of the Tigers’ snow-covered track wearing the baseball cap he was presented with during his induction into the Minnesota State Track and Field Coaches Hall of Fame. — Micah Bader/Albert Lea Tribune

The running surface changed since Jerry Kaphers ran as a senior for Lynd High School’s track and field team in 1952, but the core principles of track and field remain the same.

“The whole function of track and field is that it’s an educational device,” said Kaphers, a track and field volunteer assistant coach at Albert Lea since 2008. “It’s a way to teach a whole lot of things both physical and mental.”

Kaphers, 78, has an abundance of experience teaching athletes and performing himself.

“He is a wealth of knowledge and great at working with student-athletes,” said Lisa Deyak, Albert Lea’s track and field boys’ head coach from 2005 to 2010. “Albert Lea is lucky to have him.”

Kaphers’ athletic journey began on a grass track at Lynd High School, where he competed in the 400- and 800-meter runs. He went onto St. Cloud State College, which became a university in 1975. During his undergraduate days, Kaphers participated in track and field all four years, lettering three years.

“Back then, we ran with long spikes on cinder tracks,” he said. “There’s about a 2-second conversion if you go from the old tracks to the new tracks.”

After he earned his degree, Kaphers was hired by Grove City High School in 1957 to start its track and field program.

In the spring of 1964, he became the Albert Lea cross country head coach, and the next fall he took over as the head track and field coach. He kept both posts until 1981.

The cross country team qualified for the state meet six times and finished in the top five three times. The top finish was third place in 1967.

The track and field team finished in the top five of the Big Nine Conference standings 16 of 17 years and was the conference champ twice. The Tigers qualified for state as a team in 1976, 1973 and 1974 during Kaphers’ tenure. On an individual level, Albert Lea was the state champion in three relays. The Tigers won the sprint medley relay in 1973, set a state record in the 4×440-yard relay in 1976 and won the sprint medley relay in 1980.

However, Kaphers didn’t mention the awards when speaking about the most rewarding part of his career. What he did note was working with student-athletes like Larry Goodnature, Jon Schmitz and Terry Gjersvik.

“When I look back on it, I can roll through my head all these great young people who I’ve had a chance to coach and then watch them go off and mature,” Kaphers said. “They’re the salt of the earth.”

In 1981, Kaphers became the principal at Janesville-Waldorf-Pemberton High School. He retired in 1997. Despite his retirement, Kaphers still had an interest in track and field.

In 2008, he joined Albert Lea’s staff as a volunteer assistant.

“I’m certainly grateful to her (Deyak) for opening the door, and to Kevin Gentz, the new head coach, for accepting me doing the same thing,” Kaphers said.

No end is in sight for Kaphers’ coaching career.

“I’m an elderly Tiger to the core, and now that my wife has passed away, it gives me something constructive and positive to do,” he said. “I’ll do it as long as I feel I can be of some use and some value.”

Interesting fact: Kapers enjoys painting with watercolor. He’s self-taught and has read books on the subject.