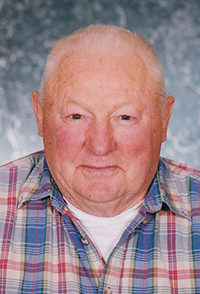 Memorial services for John Lester Christensen, 85, will be at 2 p.m. Monday at Bayview/Freeborn Funeral Home. The Revs. Clayton Balsley and Mark Miller will officiate. Visitation will be one hour prior to the service at the funeral home. Online condolences are welcome at www.bayviewfuneral.com.

John Lester Christensen was born May 30, 1928, the son of Alfred J. and Iva (Larsen) Christensen. He grew up in Albert Lea and attended country school. John served his country in the United States Army during the Korean conflict. He was stationed in Port Townsend, Wash., and operated landing crafts. In June 1952 John was united in marriage to Barbara Ann Bickford at Salem Lutheran Church in Albert Lea. John spent 70 years on the family farm working as a dairy farmer. He enjoyed refinishing furniture, taking care of the farm and his family, old time dancing, history of Indian culture and motorcycles. He loved traveling west to the mountains and taking a nap. Most of all, John enjoyed spending time with his grandchildren. The last 16 years he has been living at The New Richland Care Center, New Richland.

The family wanted to thank the staff at New Richland Care Center for the good care that was given to John during the stay there.