Megan Joyce and Arik Matson were married at 3 p.m. Feb. 4, 2014, at Fiesta Americana Condesa in Cancun, Mexico, in a double-ring ceremony. The bride is the daughter of Mitch Johnson and Michelle Joyce, both of Freeborn.

The groom is the son of Tim and Sheila Matson of Albert Lea. 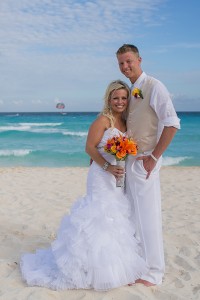 The best man was Jared Matson, brother of the groom, of Albert Lea. Groomsmen were Brent Tweed, friend, of Hayward.

The bride will be attending Riverland Community College for cosmetology in the fall.

The groom is a graduate of Minnesota State University Mankato with a bachelor’s degree in law enforcement. He is employed at the Waseca Police Department.

A reception will be held for family and friends at 7 p.m. on Feb. 15 at the Fairlane building in Albert Lea.  The honeymoon will be to Mexico at a later date.