Funeral Services for Lavon “Vonnie” Anderson of Thorne Crest Retirement Community, formerly of Conger, will be at 10:30 a.m. Saturday at St. Paul Lutheran Church of Conger. The Rev. Daphne Hamborg will officiate. Interment will be in Conger Cemetery. Visitation will be from 5 to 8 p.m. Friday at Bonnerup Funeral Service, Albert Lea, and one hour before the service at the church. 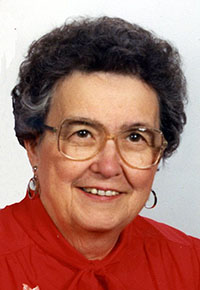 Lavon was born on May 26, 1924, in Naeve Hospital in Albert Lea, the daughter of Phillip and Vivian (Gardner) Wulff.

She graduated from Albert Lea High School and then continued her education at Mason City Business College. After completing her education, Vonnie started working in the office at Wilson & Co., in Albert Lea.

She married Russell A. Anderson on Sept. 30, 1945, at the United Methodist Church in Albert Lea. Following their marriage, Vonnie stayed home caring for her children and raising her family.

She later worked for a time at JC Penney Co.

Vonnie was a member of St. Paul Lutheran Church in Conger, where she had been active in WELCA and circle.

Vonnie was always doing for others; she especially enjoyed visiting and sharing her baked goodies with shut-ins. She was always interested and enjoyed being involved in her families lives, especially her grandchildren and great-grandchildren.

She was preceded in death by her parents, her sister Phyllis Schmidt and two brothers-in-law.

Lavon will be fondly remembered and lovingly missed.