Memorial services for Maxine J. Colstrup of Albert Lea will be at 2:30 p.m. Saturday at the Bonnerup Funeral Service Chapel in Albert Lea. The Rev. Todd Walsh will officiate. Visitation will be one hour prior to the service at the chapel. 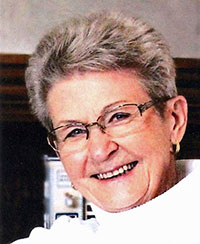 Maxine was born to Harley and Lucille (Hanna) VanHorn in Iowa City, Iowa, Feb. 19, 1940. Maxine attended school in Iowa. On Sept. 5, 1959, she was united in marriage to Kenneth Colstrup. She worked for Wells Fargo for 27 years in Albert Lea and for five years at the Wells Fargo Bank in Grand Rapids, retiring after 32 years in 1999.

Maxine was a special wife, mother, grandmother, friend and sister. She was able to enjoy her husband’s dream of living on a lake in northern Minnesota for 21 years prior to returning to Albert Lea.