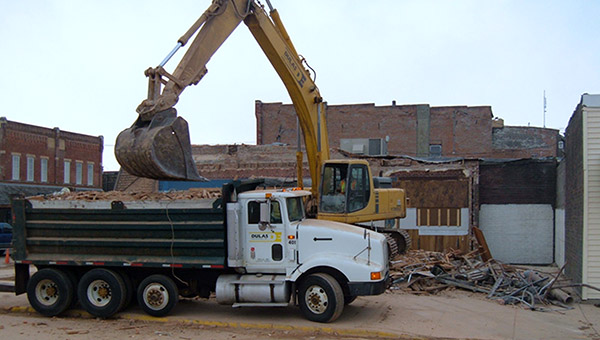 WELLS — For more than 40 years Dulas Excavating has been digging up dirt and demolishing old buildings around southern Minnesota.

The company was started by Jerry Dulas in 1971. One year later his wife, Marilyn, joined him. Forty-three years later, two of the Dulases’ children, Crystal and Ike, are running most of the operations at the company. Depending on the season, the company employees around 15 to 20 people.

“At this point my parents are involved part-time,” Crystal Dulas said. “So they are here to give advice and lead us in the generally right direction. My brother and I are filling in the spaces and trying to start some new stuff and keep up with the same business structure that was set by my parents.”

Both Jerry and Marilyn are from the Wells area, which led to the business being started in Wells. Dulas Excavating does site work, underground and demolition. It mainly serves communities within a 100-mile radius of Wells.

“I am the corporate secretary, so as you look at the board of directors, I’m the secretary of that,” she said. “My everyday title would be like a project manager. So I would do a little bit of estimating, contract administration and I do a little bit of the operations both in the office and out in our shop. Every day it’s different.”

Crystal said she always had a feeling that she’d end up working for the excavating company that features her last name.

“I went to school for engineering, and it was kind of always my general plan,” she said. “I never really knew when it was going to happen, but I had kind of always planned on doing it. Then when the opportunity arose in 2007, I decided that now was the time to go.”

She said there are advantages and hardships that come along with working for the family business.

Crystal worked on the demolition of the Albert Lea West Clinic and the site work of the new Prairie Senior Cottages. They also were involved with the new Cedar Valley Transit building and some work at Minnesota Corrugated Box and Albert Lea Select Foods. The company was part of the day-care expansion at Riverland Community College in Austin, which was recently awarded the Pyramid Award for Renovation at the ABC Minnesota/North Dakota Construction Awards Banquet in January.

It’s not scheduled, but construction kind of grinds to a halt during January and February because of the havoc that the cold temperatures can wreak on machinery and workers.

“We usually try to work until the end of the year,” she said. “We do attempt to keep working. A lot of times in January and February the weather will get us, just because it’s so cold and it takes so much to get the machines running and keep them running.”