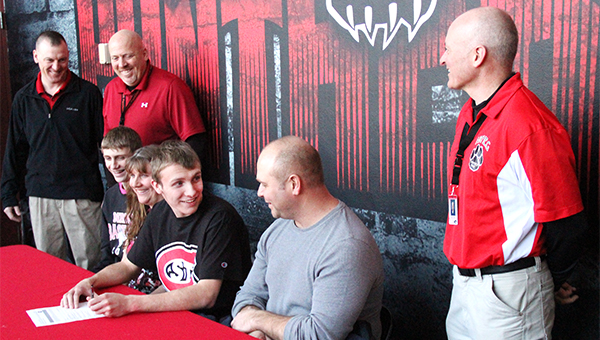 NRHEG senior T.J. Schiltz looks at his father after signing a letter of intent to run cross country and compete in track and field at St. Cloud State University next year. — Drew Claussen/Albert Lea Tribune

NEW RICHLAND — T.J. Schiltz ran away from the competition during his career as a cross country and track runner for NRHEG.

The senior will represent a different school that wears black and red next year. Schiltz signed a letter of intent to run cross country and track for St. Cloud State University.

“I kind of started looking last year,” Schiltz said. “I hadn’t really put too much thought into it. I just wanted to do the best in my seasons and see what came my way. But I started learning that not everything will come my way, and I actually have to be proactive about it and start looking.”

Schiltz medaled in two events at last year’s Class A state track and field meet. He set a school record in the 3,200-meter run. It was the third time he broke the record. During cross country this season, he qualified for the Class A state cross country meet and finished 32nd, despite being sick and running in poor weather conditions. During the regular season, Schiltz won eight of NRHEG’s meets and finished second at the other three.

Schiltz said St. Cloud State’s facilities were part of the reason he wanted to go to the school.