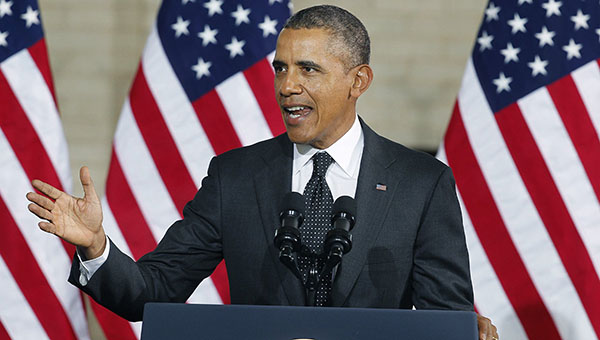 ST. PAUL (MCT) — President Barack Obama came to St. Paul on Wednesday to showcase the city’s newly refurbished Union Depot transit hub as an example of the kinds of transportation development he wants for the rest of the nation.

The president used that setting to announce his plan for a four-year, $302 billion transportation program to improve the nation’s roads, bridges, railways and transit systems.

He said he wants more Americans to have access to the kind of efficient, affordable transit the Twin Cities will have when trains start running on the Central Corridor light-rail transit line, to be known as the Green Line, in June.

“I’m here to launch a new competition for 21st century infrastructure and the jobs that come with it, because any opportunity agenda begins with creating more good jobs,” he said. “And one of the fastest and best ways to create good jobs is by rebuilding America’s infrastructure — our roads, our bridges, our rails, our ports, our airports, our schools, our power grids.

“We’ve got a lot of work to do out there, and we’ve got to put folks to work.”

He warned that other countries aren’t waiting to rebuild their transportation systems.

“They’re trying to out-build us today so they can out-compete us tomorrow,” he said.

The president proposed paying for the new projects by simplifying the tax code, closing tax loopholes and lowering tax rates for businesses that create jobs.

Federal funding for surface transportation projects is scheduled to expire in late summer, and if Congress fails to renew it, Obama warned construction projects could stop in their tracks and 700,000 workers could lose their jobs.

Keeping his pledge to act even if Congress doesn’t, the president announced a new round of competition for $600 million in federal grants to help cities and states pay for infrastructure projects.

Completed in December 2012, the long vacant depot is being used by Metro Transit buses and some intercity bus companies, and it’s poised to become busier this year when Green Line trains begin operating between downtown Minneapolis and downtown St. Paul and Amtrak service returns from its Midway station.

“So while Congress is deciding what it’s going to do next, I’m just going to go ahead and do what I can to create more good jobs. And that’s why I came here to St. Paul,” Obama said in a 20-minute speech that was interrupted frequently by cheers and applause.

Republicans responded that the president has failed to deliver on his economic promises.

“We all want good infrastructure, no doubt, and government plays an important role,” Minnesota Republican Party chairman Keith Downey said in a statement. “But this is just the same-old, same-old, copy-and-paste speech the president has been giving for five years now.

“The jobs never materialize, and the stimulus spending and tax increases never grow the economy. But when Democrats are scared and need to garner support, they start talking about roads and bridges again.”

Before Obama spoke, he and U.S.

When Mark Fuhrmann, Metro Transit’s new starts program director, offered them a ride on a new train, the president eagerly accepted. “I love trains. That is a spiffy-looking train,” he said.

After a short ride, Fuhrmann purchased the first “honorary” Green Line ticket for Obama, which he signed and returned to his host.

Air Force One touched down at Minneapolis-St. Paul International Airport at 1:21 p.m. Obama stepped off the plane in a cold wind at an Air Force Reserve hangar accompanied by Democratic U.S. Reps. Betty McCollum of St. Paul and Keith Ellison of Minneapolis.

The president’s plane took off for Washington two hours later.