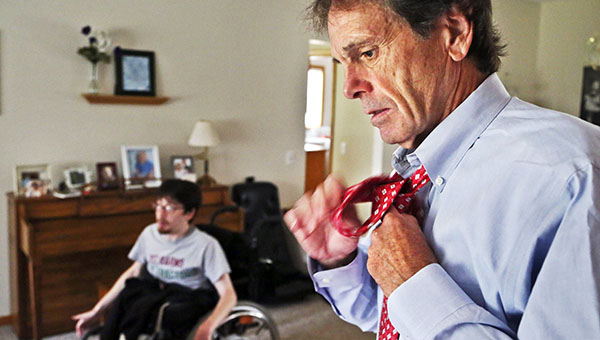 EDEN PRAIRIE — As hard as he tried, Michael Duffy couldn’t find a job to match the one he’d lost.

For two decades he earned six figures selling equipment to factories. But at 62, he kept getting turned away, one job interview after another.

So last fall he started at Starbucks.

He wears a green apron, wipes tables, mans a cash register that he’s gradually learning and banters with people who order an espresso breve or a Caramel Brulee Latte. He has natural rapport with customers, especially older ones; enjoys winning people over; and likes taking care of them.

But he makes less in a day than he did in a half-hour at the peak of his sales career.

“The pay isn’t what we would all hope,” Duffy, of Eden Prairie, said the day he started. “But it’s something to do and it’s great benefits and we’ll see where it goes.”

It has never been easy to get older, need a good full-time job and not have one. But that’s the predicament now for more Americans than ever, and the challenge has gotten steeper in the prolonged recovery. Millions of workers in their 50s and 60s are drifting into the perilous intersection of unemployment, underemployment and retirement.

“The situation is worse today than it has been in past recoveries,” said Sara Rix, a senior strategist at the AARP Public Policy Institute. “These men and women have little time to recover, and working later in life may be the only way some can make it.”

The unemployment rate for workers over 55 was higher during the Great Recession than it had been for decades, though it has fallen to a still-high 4.5 percent. Older workers remain jobless on average for about a year, far longer than younger workers. Almost half of those over 55 who are unemployed have been so for six months or longer, a total of 761,000 people.

But unemployment is only part of the unwelcome picture. The number of workers over 55 who have dropped out of the labor force but say they still want a job is about 1.6 million, a 67 percent increase since 2007.

Fair or not, some employers question older applicants’ energy and enthusiasm, their technical knowledge, and their willingness to work with young people. A general bias against the long-term unemployed also works against older workers who have been jobless for months or years.

“If the economy were roaring ahead, it would be an easier sell,” said Kevin Cahill, an economist at the Sloan Center on Aging and Work at Boston College.

“The difference, now, post-2008, is that a lot of these transitions are involuntary,” Cahill said. “It’s a huge shift, and it’s the impact of the Great Recession.”

In 1991, when Duffy was in his early 40s and looking for work, he interviewed for three jobs and got three offers.

It seemed easy, and one employer told him a secret that still rings in his ears: He was the perfect age _ old enough to have gravitas, young enough to carry the whiff of an up-and-comer.

Today, Duffy is the same guy with more experience _ still youthful, physically fit, good with people. But after six years of intermittent employment, dozens of fruitless job interviews and quiet self-assessments on drives back home, he earns $7.75 an hour working part-time at the coffee shop. He hasn’t given up, but he has learned that in a sluggish labor market, his job candidacy has lost its shine.

“It’s kind of like the baseball player who hits his late 30s,” he said, “and realizes he’s just not wanted anymore.”

The best-off Americans in retirement are the 36 percent who get income from a pension. But the share of workers with a pension has shrunk, and those who took early retirement in recent years often accepted a deal for a lesser pension.

The problems of older workers are a mix of things they can control and things they can’t. Sixty-four percent say they’ve either seen or experienced age discrimination in the workplace, but they’re also up against a weak, changing job market and the well-established bias against hiring the long-term unemployed.

“There’s this perception that if you’ve been out of work for seven months, there must be something wrong with you,” said Rix, the AARP Public Policy Institute strategist. “It is also legal to discriminate against people who are unemployed _ and by that I mean you don’t have to hire them _ and that’s a really tough one.”

Older workers often don’t have a young person’s freedom to move for a job, Rix said, so they spend more time unemployed before giving up.

“So many more workers are reaching retirement age without adequate resources for retirement that they’re looking for work longer than they did in previous recessions,” Rix said. “Ultimately, many of them give up.”

Penny Skluzacek worked more than seven and a half years at a small medical device firm in Eden Prairie. She handled accounts receivable and collections and analyzed the creditworthiness of retailers who bought from the firm. The company’s ownership changed a few times before early 2013, and then management announced at an afternoon meeting that the office would relocate to Lake Forest, Ill., and everybody would lose their job.

Skluzacek, 54, stayed on until May, and since then she has applied for more than 40 jobs. Unlike many of her younger colleagues, she is still looking.

“All the people who were between 25 and 40, they got jobs very quickly,” Skluzacek said. “All the people 45 and over, it took them longer, and some of us are still looking.”

Skluzacek, who says she is not a flashy person, says she has learned to be wary of young women in human resources departments, saying she usually doesn’t hit it off with them.

One time she applied for a job, got called in and had such a good interview with the hiring manager _ with whom she was close in age _ that he asked when she would be available to start. Then a woman from human resources was summoned to the room. Skluzacek described her as attractive, blonde, in her late 20s or early 30s. The woman sat across from Skluzacek, laid a folder on the table and instructed her to “tell me about yourself.”

“When she walked in, I just got the impression that it was going to be a short interview versus a long interview,” Skluzacek said. “I felt like I was kind of looked at, and well, you don’t meet our criteria.”

Skluzacek didn’t get the job.

Job seekers over 50 can do plenty to improve their chances, said Kerry Hannon, author of “Great Jobs for Everyone 50(Plus).” Much of her advice boils down to humbling oneself and becoming more flexible.

Older workers should take LinkedIn seriously, posting a smiling photo and a clean resume to the networking site. They should get physically fit, pointedly ask friends and family members for job leads, and volunteer or join professional associations, Hannon said. Getting into the workforce, even for a less-than-ideal job, is often worth the pay cut.

Baby boomers too often believe that when employers look at their lengthy resumes, they will automatically see how special they are, she said.

“It was a generation where things came very easily for most people,” said Hannon, who is in her 50s. “If you achieved a certain level of education, got into a certain career path, we were still in the group where you did work for someone for 20-odd years.”

Older workers must put that mindset behind them and start to think about jobs the way younger workers do _ not as permanent positions but as something more fluid.