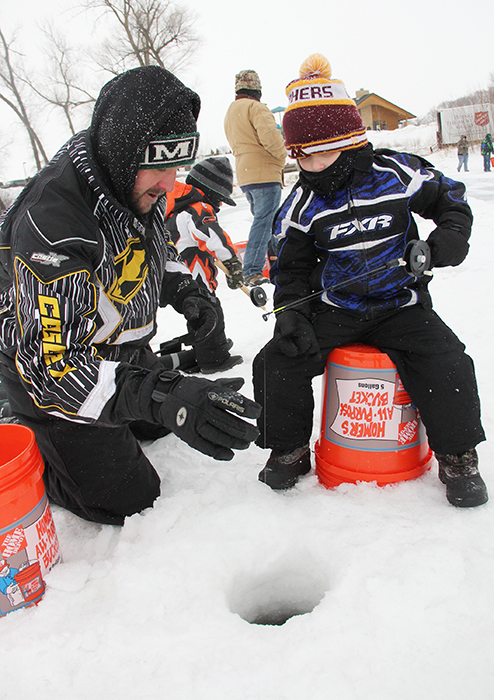 Derek Sternhagen helps his son Derek, 4, and Ashton, 2, back, ice fish Saturday morning on Edgewater Bay as part of Take a Kid Ice Fishing, one of the events of The Big Freeze. –Sarah Stultz/Albert Lea Tribune

The wind and the cold didn’t stop ice fishers from hitting Edgewater Bay on Saturday.

Parents and children gathered for Take a Kid Ice Fishing, a Big Freeze event put on by the Fountain Lake Sportsmen’s Club. Each child fisher received a jigging stick, bucket and some bait. Holes were drilled in the ice by volunteers.

With the wind gusting up to 13 mph, the temperature with the windchill was 3 degrees.

Jeremy Kallberg and his son Evan, 10, were not phased by the cold.

“I’ve been fishing lots of times,” Evan said. “I like getting outside and fishing. And I’m not playing video games today.” Evan and his dad are frequent fishers and have planned a trip to Lake of the Woods. 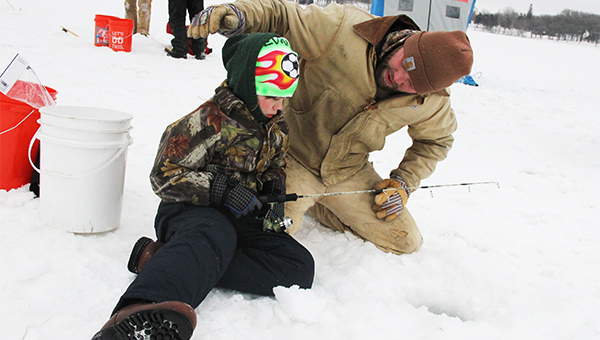 “He likes going as much as we can,” Jeremy said.

Evan said he still remembers being scared by his uncle’s catch, a large swordfish, during a past fishing excursion. The pair didn’t catch anything in the first half an hour on the lake but were hopeful their persistence would pay off.

Ian Latham, 9, and his uncle Joe Samudo had just arrived to fish at 10 a.m. It was Ian’s second time fishing and he enjoyed hanging out with his uncle.

People took a break from the cold in the Edgewater Bay Pavillion. A fire was going in the fireplace.

Dustin Peterson and his son Max, 6, were there to warm up after some ice fishing. Dustin said his son, who was well bundled up, had fun. They didn’t catch anything.

“I have only heard of one person so far that caught a fish,” Dustin said.

The event was slated to go until noon.

Disc golfers were also out on the bay for the Big Freeze Ice Bowl. Participants did three rounds on a 12-hole course.

Cash prizes were offered for the top 10 players.

Participants in several of the events were asked to bring nonperishable food for local food shelves.

The fifth annual event closed with a 7 p.m. performance by Rush Hour at 112 on Broadway.

Look to the Tribune for more coverage in Monday’s paper.