People come from across region to show their pigs 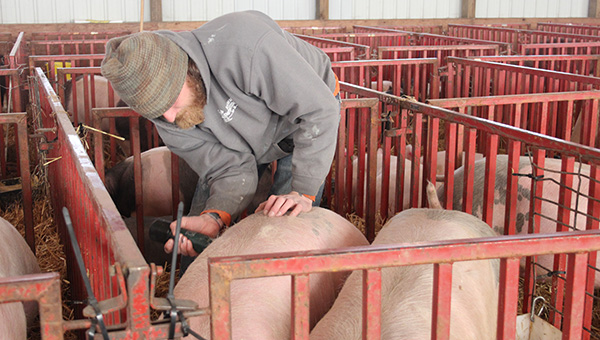 A man readied his entries in the barn at the fairgrounds. The Minnesota State Spring Barrow show is today at 8 a.m. — Tiffany Krupke/Albert Lea Tribune

By Thursday morning, despite the cold, most competitors were raring to go.

The 70th annual Minnesota State Spring Barrow Show is today at the Freeborn County Fairgrounds. Competitors from all over the Midwest will show off their pigs. 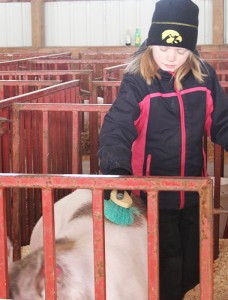 Jaden Spear, a third-grader, is competing in the Spring Barrow Show. This is her second year entering. — Tiffany Krupke/Albert Lea Tribune

Weigh-ins were on Wednesday and Thursday. Around 70 people are registered this year. Exhibitors can bring up to six animals to the show.

The number of exhibitors and animals has declined over the years. The recent addition of a purebred pig category has brought more people to the show, according to Natalie Loock, an organizer.

The show remains an important part of local agriculture because it’s about the only type of event, outside of fairs, that allows local youth in agriculture the chance to show off their animals.

For Mark Spear and his daughter Jaden of Algona, Iowa, the show is a family affair. Last year Jaden won in the individual purebred category. Mark doesn’t enter but enjoys seeing his kids participate.

“They have fun with it,” Mark said. “It is a tough competition, but it is a good experience.”

About 90 percent of the youth who participate are in 4-H or FFA. The open category allows people, like Jaden, who aren’t members of either group, to participate. 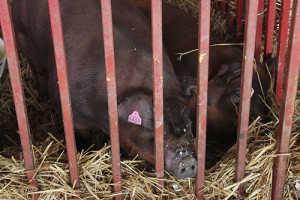 People come from all over the Midwest for the Minnesota State Spring Barrow Show, from as far south as Des Moines. The show allows competitors, from kids through adults, to exhibit their livestock and participate in a judging contest.

Junior division exhibitors must be either 4-H or FFA members and must be in at least the third grade. A children’s class will be for those in the second grade or younger who wish to exhibit.

Loock said she began showing pigs when she was 4 years old. Her daughter, 5, recently starting showing as well.

“She sees grandpa showing pigs at the fair,” Loocke said. “It is a family affair.”

Loock’s father, Daryl Mattson, who oversees the show, said judges look for a variety of things.

“We look for good, wide pigs with a lot of meat,” Mattson said.

The show will continue today with judging until 3 p.m.

Today: in the Judging Arena

8 to 9 a.m.: registration for judging contest