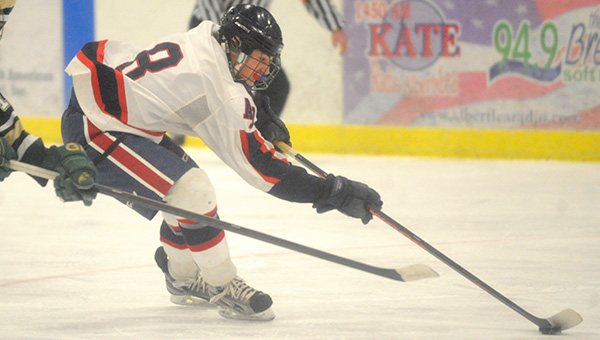 Albert Lea’s Alex Claassen scores the second goal of Saturday afternoon’s game against Rochester-Mayo while being hauled down from behind. — Drew Claussen/Albert Lea Tribune

Whether it was Albert Lea Hockey Day, the Tigers against the Spartans or coach Roy Nystrom against coach Lorne Grosso — many storylines unfolded at Albert Lea City Arena on Saturday afternoon. 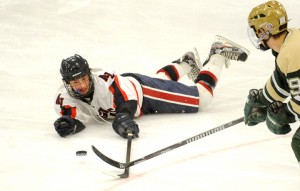 Mayo bested Albert Lea earlier this season, but this round went to Nystrom on his birthday.

“It was a heck of a game,” Nystrom said. “That’s how they started against us the first time we played them. They had us down 4-0 before we even put on our skates.”

Albert Lea scored three times on its first handful of shots in the game. Alex Claassen lit the lamp early when he hammered home a deflected puck in front of the net. The junior made it 2-0 Tigers when he scored again, despite being hauled down on a pseudo breakaway by a Rochester Mayo defenseman.

“There’s a lot of intensity,” Nystrom said. “I think a lot of it has to do with the fact that Lorne and I have known each other for so many years and we played together at the University of Minnesota. I know he’s telling his boys, ‘Hey you’ve got to beat that guy,’ and I’m telling my guys the same thing. Sometimes we beat them, and sometimes they beat us. They beat us the first time around, so now we’re even.”

Nystrom said Grosso told him after the game that he told his players to take it easy because it was Roy’s birthday.

“We always banter a little bit,” he said.

Lucas Peterson made it 3-0 Albert Lea before Mayo’s Austyn Renn cut the lead back to two goals before the first period expired. Peterson’s goal came on the power play, a unit that hadn’t been clicking for the Tigers as of late.

“We’ve been working all year long on our power play,” Nystrom said. “We played pretty well shorthanded too. That’s where we did our best job.”

The Spartans came out of the gate in the second with a ball of energy and cut Albert Lea’s lead to one when Tommy Hanson beat Garrett Matz.

Matt Cheever re-extended Albert Lea’s lead later in the second period when Wyatt Paulson sprung him on a breakaway. Andrew Thompson added an empty-net goal in the third period when Mayo pulled its goaltender late.

The win completed Albert Lea’s week sweep of the Rochester schools in the Big Nine. The Tigers beat Rochester Century 5-2 on Tuesday and downed Rochester John Marshall 4-2 on Thursday. Albert Lea will be back in action when it travels to Rochester Lourdes on Tuesday.