AUSTIN — With the local GOP Convention less than a week away, Republican Dennis Schminke spoke to more than 30 people at Piggy Blues BBQ Thursday afternoon to formally announce he will challenge Rep. Jeanne Poppe, DFL-Austin, for her seat in District 27B this November. 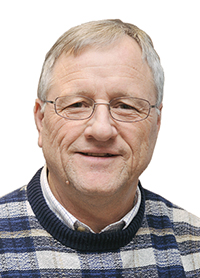 Schminke promised a campaign based on debate, noting he has a respectful working relationship with Poppe.

“We’re going to conduct a fair campaign,” he said. “I don’t think we’re going to be slinging any mud, but were are going to have a robust discussion around the issues.”

Schminke introduced a slogan for the campaign: “A Plan For Prosperity — It all starts with a job,” and he described jobs as a vital vehicle for learning, as well as for earning a living.

“The state has some very legitimate roles,” he said. “The state has to do the right things to put a legal and economic framework in place that helps people establish businesses.”

He also said the state needs to be involved in supporting lifelong learning.

Schminke said the state should have a safety net for people who hit difficult times, but he said it should push people to be self-sufficient, rather than ensnaring them

The 2013 session, he said people saw what they get when they have one party rule, which he called “ideology run amok.” Schminke criticized many things that passed in the 2013 legislative session, including tax increases, a proposed $90-million Minnesota Senate building and MNsure. He described the health bill as a “one-size-fits-all” government solution that’s not the answer.

“There are some people that are going to get coverage they never had before, and then there’s a whole lot of people who had coverage that they were more or less happy with that were forced off of it,” Schminke said.

He also spoke about business taxes meant to entice new businesses to Minnesota, and argued the state is losing out to neighbors like Iowa and North Dakota.

“We are leaking jobs and income and wealth out of the state of Minnesota and into other states,” Schminke said.

Many issues, like minimum wage, are not as simple as they seem, he argued.

“There’s a lot of things to consider on both sides of that issue,” he said.

One driving issue will be the economy.

On March 8, Schminke will seek the party endorsement at the Mower County GOP’s annual convention.

“I just really care about government and the way that it affects the lives of the people, whether it be for better or sometimes for worse,” Schminke said.

Schminke grew up in Council Bluffs, Iowa, and has lived in Austin for several years. He has a background in accounting and finance. He retired in 2012 after working for Hormel Foods Corp. for 38 years.

He also worked in IT and later operations research at Hormel.

Schminke has been involved with the Mower GOP for more than five years. He considered a senate run two years ago, but he was still working at the time.

Schminke has not previously ran for a state seat, but he unsuccessfully ran for a school board seat. But, he said he’s already dedicated to this campaign.

“We’re in this to win this,” Schminke told the crowd.