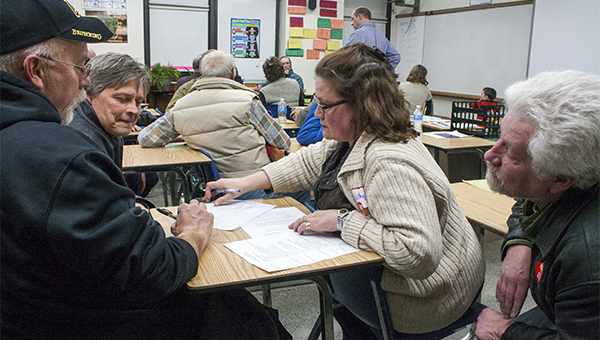 Out of 179 paper votes cast at the party caucuses, 94 people voted in favor of Seifert, a former Minnesota House of Representatives minority leader, according to the results.

Seifert, of Marshall, is one of six candidates running for the Republican endorsement against incumbent DFL Gov. Mark Dayton in November. 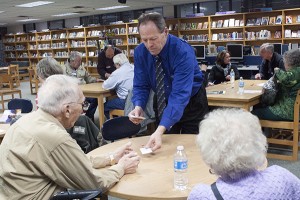 The fewest number of votes went to Rob Farnsworth, a teacher and candidate for Minnesota’s 8th Congressional District in 2010, and 34 people were still undecided in the race.

Though not binding, the results give the candidates an idea of how they favor in the race.

Party leaders said they were thrilled with the turnout, which was an almost full-house crowd in the Southwest Little Theatre.

“I think more people are concerned about the needs of the country,” Dettle said.

Former District 27A Rep. Rich Murray, who kicked off the night, said there are several government programs that should not be in effect.

“There’s no better time to be a Republican than right now,” he said.

In the race for the U.S. Senate seat against incumbent Democratic Sen. Al Franken, the highest number of county Republicans stated they were undecided.

Out of 177 votes cast for this position, 57 people identified themselves as undecided, according to the results.

After that, the next highest number of votes went to Julianne Ortman of Chanhassen, who received 37 votes. Businessman Mike McFadden came in with 32 votes.

The remaining four candidates received between one and 24 votes.

In addition to the straw polls, residents elected delegates to represent each caucus at the upcoming county convention in March and had the chance to talk about party platforms.

Before dividing up into caucuses, held in separate rooms at the school, the crowd heard from the candidates for the District 27A House seat against DFLer Shannon Savick of Wells.

Peggy Bennett, a Sibley Elementary School first-grade teacher from Albert Lea, said she was concerned that the state and nation are headed in the wrong direction.

She said the state needs to create opportunities for people through solid education and a strong business climate.

Firearms seller Milan Hart of Albert Lea called for the party to be unified and talked about how some of his own life experiences have brought him to where he is today.

He said he thinks rural Minnesota needs a rebirth.

The party will gather for the Freeborn County convention March 22 at the Albert Lea American Legion.

The District 27A convention is slated for March 29 in Geneva with the state convention May 30 and 31 in Rochester.