Sisters excel on the ice 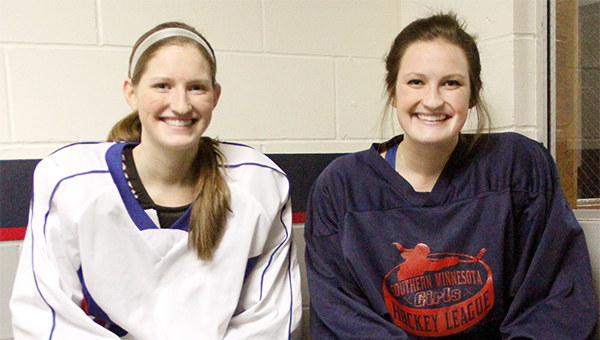 The Albert Lea girls’ hockey team is a close-knit group of girls. However, two players are a little closer than others. 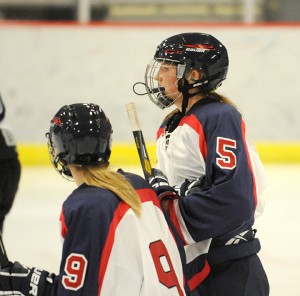 Both girls got started playing hockey with help from their father, Don, who played at Albert Lea High School and St. John’s University.

Sarah, one of four seniors on Albert Lea’s team, cracked the varsity lineup when she was in eighth grade. She was forced sit out her freshman and sophomore years because of jaw surgery.

“I couldn’t play because of that,” she said. “So I got back into it because of my sister. I came into it knowing it would be hard, but all the girls were super supportive.”

Hannah, a sophomore, also made varsity in eighth grade.

Both sisters genuinely enjoy each others company on the ice.

“It’s really fun. We get to play on the same line which is nice because we get to work off of each other,” Hannah said. “We have a connection. We know what each other is going to do.”

The two spent most of last season on the same line. This year, they split up a little, but still find themselves together at points throughout the game. Both sisters scored two goals in Albert Lea’s 4-1 victory over Austin in late November.

“Last year we were consistently on the same line,” Sarah said. “But this year has been kind of spotty with the coaches changing and trying to figure out the lines. But we’ve been on a line a few times this season.” 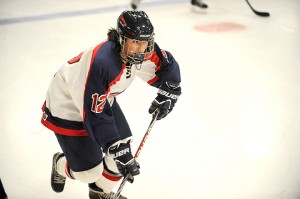 Hannah said one of her sister’s strong points is how she gets a lot of shots off, which allows the rest of the team to crash for rebounds. Sarah said her sister’s leadership was one trait that impressed her.

“She’s a strong player,” Sarah said. “Her shot is very good. She’s a leader. She pushes me, even though she’s younger than me. I’d say her work ethic is a strong point as a player.”

A trait about both girls cued by coaches and teammates alike is how they seem to know what the other is going to do without verbally communicating.

When asked which sister was more skilled, Sarah replied Hannah. The younger Savelkoul declined to answer.

“I think we individually have our strengths and weaknesses on the ice,” she said.

First-year head coach Laura Hillman gave props to both of the sisters.

“Sarah is really big on leadership, and she’s very vocal on the ice,” Hillman said. “Hannah, she is one of the smartest hockey-sensed people on our team. She studies the books, and she knows the ins and outs. When it comes to hockey sense, she’s got it.”

Albert Lea will begin postseason play tonight in the Section 1A quarterfinals at Northfield. Sarah’s goals are pretty simple in her last postseason.

“My goal — and our goal as a team — is to give it everything we’ve got and push through everything,” she said. “It’s been a good learning experience. I’m definitely going to take a lot away from this season.”