Funeral service for Stanley A. Kukuzke will be at 10:30 a.m. Saturday at St. Theodore Catholic Church, Albert Lea. Visitation will be from 4 to 7 p.m. Friday at Bonnerup Funeral Service and one hour before service at the church. The Rev. Timothy T. Reker and Deacon Mike Ellis will officiate. Interment will be at a later date in St. Bernards Cemetery in Stewartville.

Stanley died Tuesday, Feb. 18, 2014, at Thorne Crest Retirement Community from complications of multiple sclerosis and dementia. He was 75.

Stanley was born on March 15, 1938, in Stewartville to Alta (Cray) and Carl Kukuzke. He graduated from Stewartville High School in 1958 as one of the school’s greatest athletes. After high school he attended Mankato State University and was the Most Valuable Football Player of the Year as a freshman and was offered to try out with the Chicago Bears. 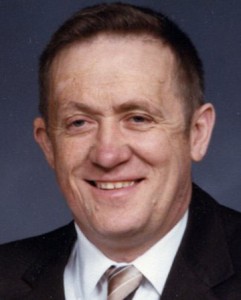 He taught school in Wyoming, Iowa, for three years as head football and track coach. He started their wrestling program and taught industrial arts and driver’s ed, along with driving a school bus. In 1969 he moved to Albert Lea and set up the power mechanics course at the high school, teaching it for 11 years, and coached football and track for three years. He was a Boy Scouts leader for 11 years. On Aug. 12, 1961, he married his high school sweetheart, Charlene Munson, in Stewartville. Together they raised two sons, Michael and Mark. He was a member of St. Theodore Catholic Church. In his earlier years he loved to hunt, played every sport and was very handy. He could fix almost anything, which he passed on to his sons.

Special thanks to the staff at Thorne Crest and Hospice for compassion and care.