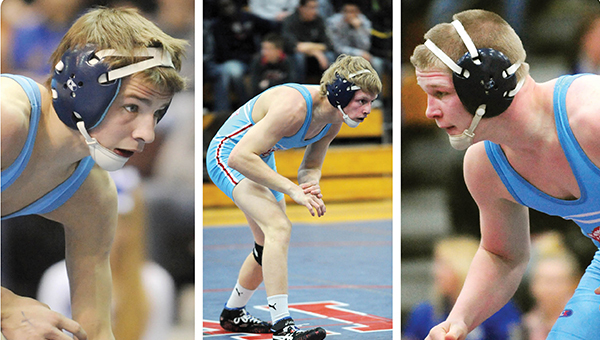 Albert Lea is set up for success at Section 1AA tournament

The road to the state wrestling tournament goes through the two-day individual Section 1AA tournament that starts today at the Mayo Civic Center in Rochester.

Eight of the 12 wrestlers in each weight class were given a seed at a coaches meeting on Wednesday.

“We did really well in the seeding,” he said. “Now, the kids have to go out and wrestle it.”

Aldrich finished the regular season 32-7 to take the top spot at 106 pounds. Ranked No. 6 in The Guillotine’s polls from Feb. 7, Aldrich upset Keaton Schorr of Kasson-Mantorville, ranked No. 5 in the Section 1AA team finals with a 7-4 decision. The duo could meet again on Day 2 of the tournament.

Nelson earned the No. 1 seed at 138 pounds with a regular-season record of 27-5. Nelson is No. 5 in the state polls, and he will not face another ranked wrestler in the section.

Westerlund, the defending state runner-up in Class AAA at 182 pounds, will have a different road to the podium this season. He racked up a record of 14-2 and recovered from an injury late in the season to take the No. 1 seed in the 195-pound weight class. Westerlund is ranked No. 3 in the polls. Matt Hintz of Byron, ranked No. 10 with a record of 24-5, will be a formidable opponent. 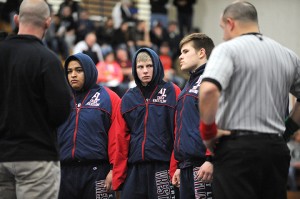 Wrestlers from Albert Lea stand on the mat Jan. 25 at home against Owatonna. From left are Will Mendez, Beau Johnsrud and Tim Christianson. All three wrestlers earned a seed at the Section 1AA tournament in the top four. — Micah Bader/Albert Lea Tribune

Albert Lea’s Beau Johnsrud may have the toughest road to state. He qualified for the state tournament last season and has been ranked as high as No. 4 this year. In the Feb. 7 polls, Johnsrud was No. 6. However, Skyler Petry of Waterville-Elysian-Morristown — ranked No. 1 at 35-0 — and Ryan Epps of Cannon Falls — ranked No. 4 at 31-4 — pushed Johnsrud to a No. 3 seed.

Instead of competing in Class AAA, as they did in 2013, the Tigers will compete in a smaller division: Class AA. However, that doesn’t always translate to easy wins. In one aspect, Goodnature said it’s tougher.

In team duals, falls are important for bonus points. They’re not as critical in the individual tournament, though. A one-point decision has the same result as a pin.

“You just need to win to advance onto the next match,” Goodnature said. “It’s that fun part of the year. The kids have worked all year long for this opportunity.”

Doors open at the Mayo Civic Center at 11:30 a.m. today. The first round starts at 12:30 p.m. The quarterfinals will be at 1:30 p.m. The consolation quarterfinals and the first and second rounds of wrestlebacks will run from 5:30 p.m. to 8 p.m.

The semifinals will kick off Day 2 at 11 a.m. Saturday. The consolation semifinals will be from 1:30 p.m. to 3 p.m. The championship, true second-place and third-place matches will start at 5 p.m.