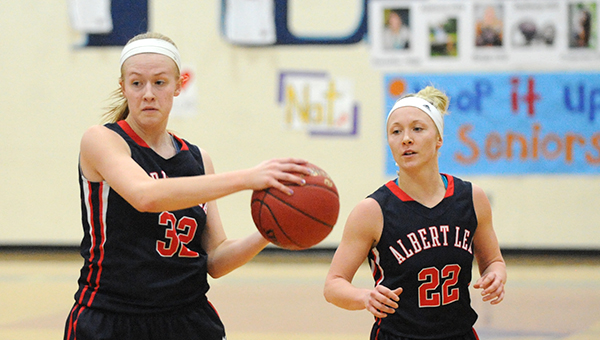 A chance for the Albert Lea girls’ basketball team to keep climbing the Big Nine Conference standings was thwarted by Mankato East on Thursday in triple overtime.

Both teams made one free throw in the first overtime. Neither team scored in the second overtime, and Mankato East hit two 3-pointers to take the lead and win in the final overtime.

An Albert Lea win would have tied the Tigers and Cougars at fifth place in the Big Nine standings.

Despite the loss, Albert Lea head coach Lindsey Hugstad-Vaa said the game will prepare her team for the section tournament.

“It’ll help us when it comes to battling through adversity,” she said. “I’m proud of how hard the girls played. There was nothing to be ashamed of.”

“Megan stepped up defensively and was hitting her shots,” Hugstad-Vaa said. “Bryn is so composed out there as a leader. They both played well.”

Sarah Niebuhr led the Tigers in the paint with 10 rebounds and one point.

“Sarah played well on defense, too,” Hugstad-Vaa said. “She did a good job of bumping Ziegler around.”

Ziegler was held to seven of 15 from the field, but she scored a team-high 24 points and grabbed a game-high 23 rebounds to lead Mankato East.

Mankato East swept the regular-season series because of a 55-48 home win over the Tigers Jan. 21 at Mankato.