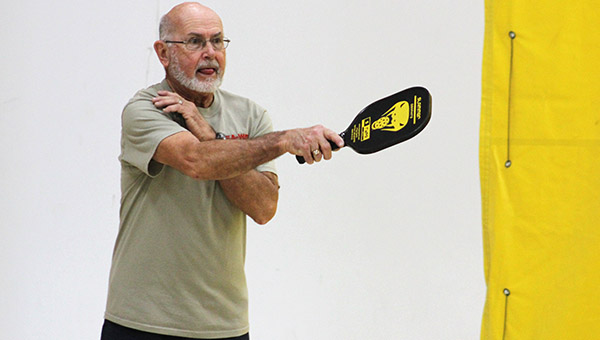 Two tennis courts in Albert Lea’s Frank Hall Park will be transformed this summer into courts for a growing sport called pickleball. 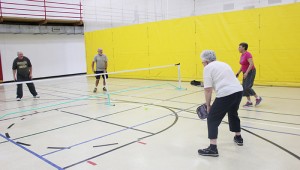 While the city will pay for resurfacing and painting of the pickleball courts, a group of players has started fundraising for new nets, paddles and other supplies, said Parks and Recreation Department Director Jay Hutchison.

“We want to take that asset and turn it into a viable recreation site for everyone in town,” said Gail Levorson, one of the players.

Levorson said the sport was invented in 1965 on Bainbridge Island, Wash. The original purpose was to have a game where the entire family could play.

Pickles was a family dog that would chase the balls and hide in the bushes. The family would call to Pickles for the ball. 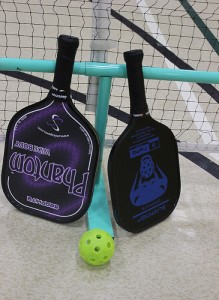 Pickleball is a mix between tennis, table tennis and badminton and is played with paddles. — Sarah Stultz/Albert Lea Tribune

Pickleball now is played by people of all ages and levels.

“I don’t know another sport you can do like that in town,” she said.

Levorson said the rules are simple, and the game is easy for beginners to learn. Players use paddles smaller than tennis rackets but larger than table-tennis paddles. The ball is plastic with holes like a wiffleball.

After completion, there will be six to eight pickleball courts, and one court at the park will remain dedicated to tennis, Hutchison said.

The sport took off in Albert Lea last summer when makeshift courts were set up at Academy Park. In 2012, about five people played the sport at the park, and in 2013 there were about 40 ranging in age from 12 to 74. They played six times a week.

Levorson said the long-term goal is to bring in a tournament to Albert Lea.

Ron Hansen, who plays pickleball at a temporary court set up in the Albert Lea Family Y, said he likes the sport because it keeps him active.

“I’m retired, so it’s another thing to do during the day,” Hansen said. “And I enjoy meeting new people.”

During the winter, the players meet at the Albert Lea Family Y to play indoors at a court set up in the gym. They meet at noon on Tuesdays and Thursdays and at 5 p.m. Mondays. Members can play for free; cost is $3 a day for nonmembers.

People interested in taking part in the courts at Frank Hall Park, can write a check to the Albert Lea-Freeborn County Chamber of Commerce Foundation, which is handling the funds, Levorson said. Write “Pickleball” in the memo line.

The group is also applying for grants and asking businesses in the community for contributions.