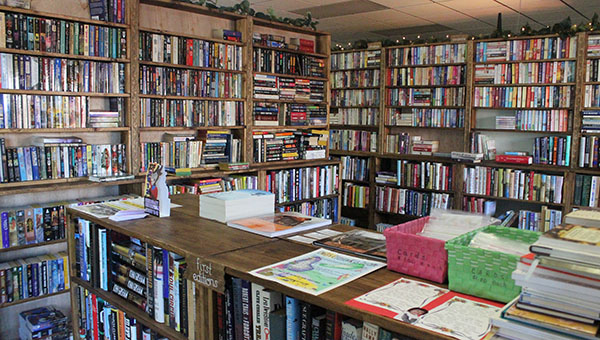 A Bit Bookish opened in Clarks Grove in November 2012. Part-owner Kim Hammer said it had always been her dream to open a used book store. The store inhabits the former bank building in Clarks Grove. — Kelli Lageson/Albert Lea Tribune

CLARKS GROVE — Kim Hammer had always planned on opening a bookstore when she retired, and she got a little head start a few years ago.

Hammer opened A Bit Bookish right after Thanksgiving in 2012. She runs the store along with her mother and daughters in addition to working with bail bonds.

“I always wanted to have a bookstore and it was always in the back of my mind as a retirement ides,” Hammer said. “A friend of mine bought the bank building in Clarks Grove and I was helping him try and figure out what to do with that space. We remodeled some of the main floor into apartments and then with the retail space that was left, I just thought it would be a great place for a bookstore.”

A Bit Bookish is in the former bank building on Main Street in Clarks Grove. It has set hours five days a week but is always available to be opened if anyone wants to drop by sometime else.

“I think the reading life of a community is a very important thing,” Hammer said. “I’m concerned about Albert Lea because our public library is closed on Fridays and Saturdays, which I think is a really bad sign that people are getting away from reading. We do pretty good business with the kids books in Clarks Grove, so we have a pretty good following of young people that come in there and buy and trade books. That’s encouraging.”

Hammer said that she wanted to open the bookstore to replace a store that had closed in Albert Lea and added that it was important for people around the area to have a place in which to buy, sell and trade books. During the year before she opened she frequently put ads in local newspapers asking for used books from people.

“I collected the used books and just kind of stockpiled them,” Hammer said. “When I thought we had enough to make a run at it, we cleaned out the bank building and building shelves, and my mom started putting all the books into a computer program.”

To go along with books, Hammer is working on putting together a gift shop and coffee lounge area. She also hopes to get some of her inventory online at some point. There are also book signings with local authors. She said the biggest part of the business is trading books.

“It gives people a chance to let other people read their books and also get different books,” Hammer said. “Books are really expensive right now, and it’s nice to be able to trade out and continue reading without investing a lot more money.”

Though Kindles and iPads have become more popular, Hammer said she doesn’t think a old-fashioned paper book will ever get replaced.

“People like to hold a book and readers love bookstores,” she said. “So hopefully we can keep doing this and provide the service, which is what it is because it’s not profitable, but it’s important that we keep our kids reading.”