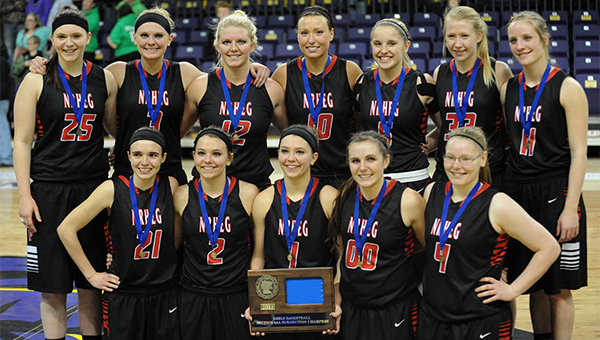 MANKATO — Two cliches in sports are that it’s tough to beat a team three times in one season, and it’s hard to end a team’s season.

Both scenarios played out for the NRHEG girls’ basketball team in its 45-34 victory over Waterville-Elysian-Morristown Monday night in the Subsection 2AA South final at Minnesota State, Mankato University’s Bresnan Arena. 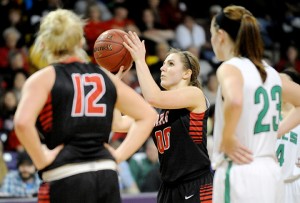 NRHEG already defeated Waterville-Elysian-Morristown twice during the regular season. The Panthers won those two games 75-39 and 83-48.

So the Buccaneers changed strategies.

“The defense tonight was one that we haven’t seen. They played a much different one,” said NRHEG head coach John Schultz. “And we have got to make our shots. We missed everything we shot. Usually we get rebounds and get the second shot, but we weren’t doing that very well. They boxed out very well.”

During the first half, it appeared the Buccaneers learned from their previous losses. The two teams went to halftime tied at 15, a point total the NRHEG usually eclipses in the first few minutes of an average game. Waterville-Elysian-Morristown was able to stop NRHEG’s potent fast break by simply not giving up the ball. It frequently had offensive possessions that lasted more than 45 seconds.

“That’s really frustrating,” Schultz said. “Typically the trap will get things going, and we’ll try to attack the ball. They were patient coming out. We weren’t working hard enough on that trap. It takes a lot of energy, but for some reason we didn’t have it tonight.”

The Buccaneers were able to keep the game close in the second half, too, until NRHEG extended a 21-19 lead with nine minutes left to a 28-21 advantage with 7 minutes and 42 seconds left. The run caused all of the NRHEG fans, which occupied about half of the arena, to get on their feet and make a lot of noise.

With less than one minute left in the game, Jade Schultz grabbed the 1,000th rebound of her career. Schultz — who committed to the University of Minnesota this weekend — also had eight points in the contest.

“(Overgaard) pulled us out,” Schultz said. “She did an awesome job.”

An aspect of their game the Panthers hope to improve on before their next game is consistently making 3-pointers. NRHEG was 3-20 from downtown against the Buccaneers.

“We hit a couple of those threes, and its a different ballgame. Then, we can stall,” Schultz said. “But you have to have a little bit of a lead if you want to stall and not hurt us.”

NRHEG will play Norwood Young America in the Section 2AA finals at 8 p.m. Friday in the same building with a trip to state on the line. The Panthers were Class AA state champions last season and took third place the year before.