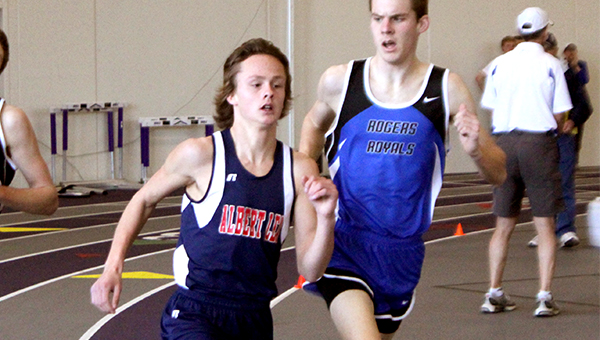 Jackson Goodell, left, of Albert Lea competes in the 1,600-meter run Tuesday at the University of St. Thomas in Minneapolis. Goodell won the event in 4 minutes, 57 seconds. — Lon Nelson/For the Albert Lea Tribune

Snow on the ground hasn’t stopped the Albert Lea boys’ and girls’ track teams from preparing for the spring season.

The Tigers competed Tuesday at an indoor meet at the University of St. Thomas in Minneapolis.

“Technically, it does count as a meet for us,” said Albert Lea boys’ head coach Kevin Gentz. “We wore our official uniforms, but they don’t keep an official score.” 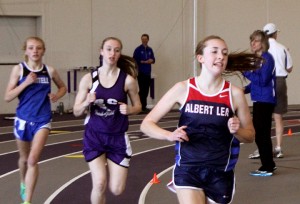 Riley Schulz of Albert Lea competes in the 1,600-meter run Tuesday at the University of St. Thomas in Minneapolis. — Lon Nelson/For the Albert Lea Tribune

Teams that participated did not show up with their entire squads, but Gentz said the Tigers had solid performances with three first-place finishes and four second-place finishes.

Kozelsky took second place in the 400-meter dash with a time of 58.9 seconds. Colton Mowers finished second in the 200-meter dash in 25.1 seconds.

Tim Christianson earned the top finish for the Albert Lea boys’ in field events with a toss of 38 feet, 8 inches in the shot put to take second place. In practice this season, Gentz said the Tigers utilized a different kind of exercise. They brought shovels out to the track and cleared snow.

“Even though it’s cold, we’re going to bring out the mats,” Gentz said. “We’re out there. Yesterday we were running in the snow. That’s just what you’ve got to do.”

The Albert Lea girls’ track and field team also participated Tuesday at the University of St. Thomas, but statistics were not available.

However, Albert Lea head coach Margo Wayne said the Tigers looked good in many events including the high jump and 800-meter run.

In the 800-meter run, Hannah Savelkoul took first place in her heat.

“She ran a very strategic race,” Wayne said. “She got passed, but then passed the same girl at the end of the race to finish first.”

The Albert Lea boys’ and girls’ track and field teams will compete next at NRHEG at 4 p.m. April 1.