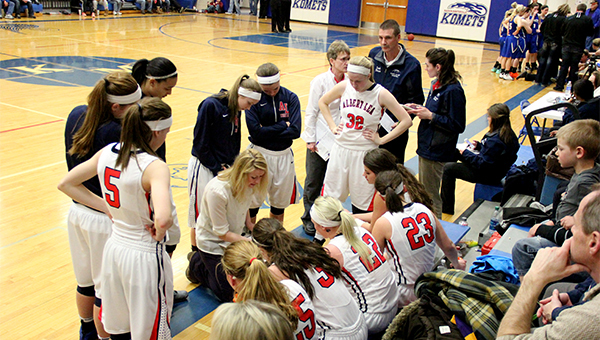 KASSON — Headed into the Section 1AAA semifinals, the Albert Lea girls’ basketball team was playing at the top of its game.

The Tigers hadn’t lost by more than five points in their last 10 outings, despite playing three of the top four teams in the Big Nine Conference. 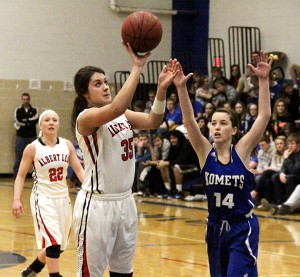 However, the ball didn’t bounce their way Saturday in the second round of postseason action at Kasson-Mantorville.

“It wasn’t for lack of effort,” said Albert Lea head coach Lindsey Hugstad-Vaa. “They worked their tails off, and I’m really proud of them.”

With five minutes left in the first half, Kasson-Mantorville led 32-26. The KoMets extended their advantage to 13 points in the next two minutes. The Tigers battled back when Bryn Woodside drilled a 3-pointer and made a free throw 9.6 seconds before halftime to shave their deficit to single digits.

Kasson-Mantorville led 41-32 at the half.

The KoMets’ Danika Hodgman scored 17 of her 19 points in the first half. Woodside and Sydney Rehnelt both had 12 points at halftime for Albert Lea.

In the second half, Kasson-Mantorville extended its lead back to double digits. Albert Lea whittled what had been a 14-point deficit at the 13-minute mark down to 10 points when Megan Kortan hit a 3-pointer with nine minutes left in regulation.

However, the KoMets responded by going on a 16-6 run to take a 20-point lead they never relinquished.

The Tigers’ shooting was like the temperature outside. They shot a lower percentage from the field, 33 percent, than they had in any of the last four regular-season games.

“Our team was off,” Hugstad-Vaa said. “We had some uncharacteristic turnovers, and we missed some free throws and defensive box-outs. Once that started adding up, it was hard to climb out of.” 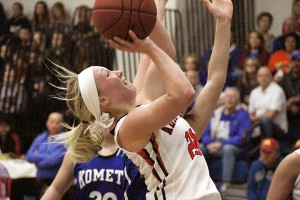 Sydney Rehnelt led Albert Lea with 22 points. She was four of seven from beyond the arc and perfect from the free-throw line.

“We have two 1,000-point scorers (Woodside and Rehnelt), and they’re great role models in the school and community,” Hugstad-Vaa said. “All the girls from the traveling teams to the C-squad to the JV look up to them.”

Hugstad-Vaa credited the duo with getting the team on the right track.

“They’ve done such a great job of taking the program, advancing it to where it is now and gaining respect from teams we play,” she said.

In addition to Woodside and Rehnelt, the Tigers have two other seniors who contributed: Caycee Gilbertson and Lynzee Underdahl.

Gilbertson led the Tigers in the paint with six points.

“Caycee was on JV last year, and she was starting for us (this year), and Lynzee Underdahl brings a lot of positivity to the team,” Hugstad-Vaa said. “All four of them — we’re going to miss them a lot.”

Albert Lea and Kasson-Mantorville met at Kasson Dec. 7 in the Tigers’ second game of the season. The KoMets won the first game by one more point than the rematch: 81-64.

Hugstad-Vaa completed her second season at the helm of the girls’ basketball program. She inherited a team that was 4-23 during the 2011-12 season, and her teams haven’t finished with fewer than 11 wins. Last year, the Tigers had an 11-14 overall record, and this year they were 11-17.