Albert Lea hockey coach is inducted into Hall of Fame 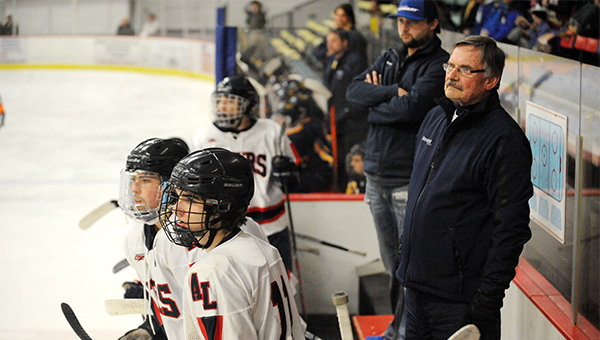 Albert Lea boys’ hockey head coach Roy Nystrom, left, and assistant coach Adam Royce watch a game on Feb. 18 against Waseca in the first round of the Section 1A tournament at Albert Lea City Arena. The Tigers finished the season with a 15-11-1 overall record. — Micah Bader/Albert Lea Tribune

Every coach Roy Nystrom ever played for is in the Minnesota Hockey Coaches Association Hall of Fame. Now Nystrom himself sits alongside the likes of John Mariucci, Cliff Thompson and John Mayasich. 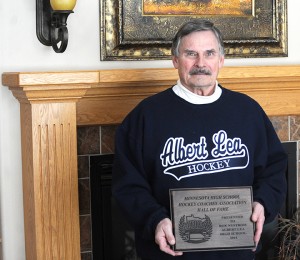 Roy Nystrom holds the plaque presented to him when he was inducted into the Minnesota High School Hockey Association’s Hall of Fame. Nystrom is the second-winningest high school coach in Minnesota. — Drew Claussen/Albert Lea Tribune

Albert Lea’s head man was inducted on March 6 at a banquet at St. Paul’s River Centre during the Minnesota State High School League boys’ hockey tournament. He was one of five inductees, one being his friend, former teammate and fellow high school coach Lorne Grosso of Rochester Mayo. Pat Furlong, who was a Gopher at the same time as Nystrom and Grosso, was also inducted.

All of the inductees gave a short speech at the banquet.

Nystrom grew up in Eveleth and played hockey for Eveleth High School. After he graduated, Nystrom headed to the Twin Cities to play hockey for the University of Minnesota from 1961 to 1965.

“That’s where the hockey was back in the day. Up north,” Nystrom said. “Eveleth, Roseau and International Falls, and all of those teams were just excellent hockey teams. They’d come down to the state tournament and just walk right through it.”

After college Nystrom accepted a teaching and coaching position in Grafton, N.D. He stayed four years before he moved to Grand Forks Central High School.

The rest is history.

Nystrom completed his 41st season at the helm this year. He is second in the state, behind Grosso, with 671 victories in more than 1,000 games. The high school where Nystrom played, Eveleth, will come south and face Albert Lea next season. The Tigers will head north and return the favor in Eveleth the next season.

“I’ve never brought my team back to the Eveleth Hippodrome to play, so that’ll be interesting,” Nystrom said. “It’s almost like a museum up there. You walk in, and there’s a picture of all of the so-called hockey greats who played for Eveleth High School and went on to play in college or the pros. There’s a lot of history back there.”