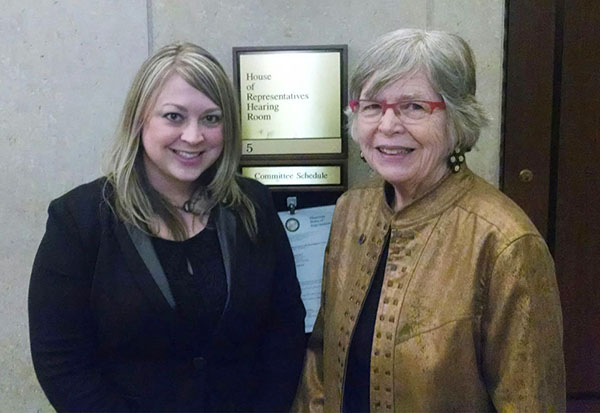 Lakes Foundation President Laura Lunde stands with District 27A Rep. Shannon Savick Tuesday at the Minnesota Capitol where she and others testified for the extension of Albert Lea’s half-cent local options sales tax. – Submitted

A group of Albert Lea leaders traveled up to the Minnesota Capitol Tuesday to testify in front of a House committee about the extension of Albert Lea’s local-option sales tax.

Lakes Foundation President Laura Lunde said the chairman and the committee members on the Property and Local Tax Division were receptive to the testimony presented.

“We are very excited to have this initial hearing completed,” Lunde said.

The House tax committee will next consider the bill, authored by District 27A Rep. Shannon Savick, for the overall tax bill.

Once the bill is compiled, it will come for a vote on the House floor.

The half-cent sales tax, which was approved by more than 80 percent of voters in 2005, is used for lake improvements under the Shell Rock River Watershed District. One of the main goals is to dredge Fountain Lake.

The proposal calls for the tax to expire once the $15 million threshold is met — or at the end of five years, whichever comes first — at which time organizers may call for a formal referendum to renew the tax.

City officials are traveling up to the Capitol again on Thursday to meet with legislators about the Shell Rock River Watershed District’s $7.5 million bonding request to dredge Fountain Lake.