Alice M. Sathre, 92, of Adams died at her home on Feb. 27, 2014, surrounded by all of her children. She smiled for the family and took her last breath and entered heaven. 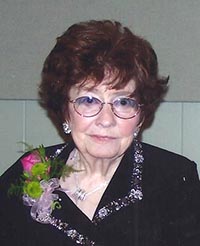 Alice Minnie Johnson was born Aug. 10, 1921, in rural Hayward, the daughter of Walter and Carrie (Munson) Johnson. She had three sisters, two brothers and was the middle child.  She graduated from the Adams high school, where she was a cheerleader and known for her smile. After graduation, Alice worked as a secretary at Albert Lea Co-op Creamery. She was married to Harvey Sathre on Sept. 20, 1942, at Little Cedar Lutheran Church in a military wedding. After marriage she moved to Carthage, Mo. to be with Harvey, who was stationed at Camp Crowder. It was there that their first child, Diane, was born. Alice lived in Carthage until Harvey was shipped overseas. She then relocated back to Adams and took employment at Hormel Co. She worked at Hormel until Lynn was born, then became a full time farmer’s wife.

After the children were grown, Alice took employment with LPC in LeRoy and then at Adams Health Care Center as a certified dietary manager and worked for 14 years. Alice enjoyed cooking, family and friends, where she touched many lives. Alice was active in the Farm Bureau, the Republican Party, PTA and 4-H. In 1979, Alice was recognized as one of the top 10 women in Mower County for contributions to society. She was also Mrs. Republican of Mower Co. and was on the State Central Committee.

Alice was always involved in church activities. She had many blessings in her life and never failed to thank God for all of them. She was humbled to be able to live to the age of 92, and to have been married to her loving husband for 71 years. Alice suffered cardiac arrest in 1996, cancer surgery and treatment in 1997 and a massive stroke in 2004. Despite all of this, she still lived her life to the fullest and maintained her sweet and thankful personality. She never ceased to smile and love everyone.

Alice was noted for her kindness and open door for anyone who came and was sure to serve you hot coffee and food with a big smile. She was an excellent cook, but more so, an excellent mother and grandmother.

She was preceded in death by her parents, husband, Harvey, in November 2013, great-granddaughter Faith Kristine Sathre, brothers and sisters.