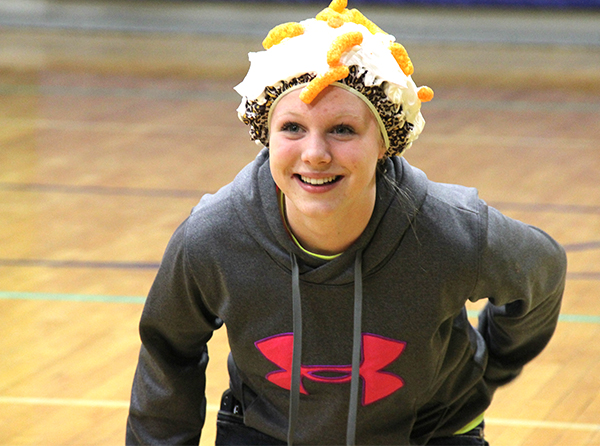 Glenville-Emmons students paired up for the cheese puff throwing game at the Ag Olympics. One participant put on a shower cap and covered it with shaving cream while their partner threw cheese puffs at their head. – Tiffany Krupke/Albert Lea Tribune

Glenville FFA members ate jello, carved butter and threw cheese puffs on the shaving-cream covered heads of their fellow students during their Ag Olympics on Wednesday. 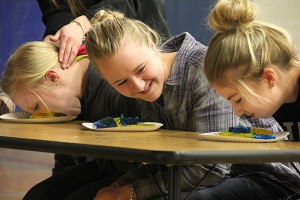 FFA week ran from Feb. 15 to 22 at the school. The Ag Olympics were scheduled for Feb. 21, but were postponed due to snow. 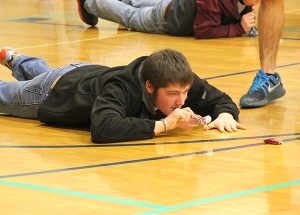 A students uses a noise maker to get a toy car to half court during the Ag Olympics. – Tiffany Krupke/Albert Lea Tribune

Heart Throb king contestants opened up wrapped boxes of candy. The student who received the blue box of candy was chosen as king. 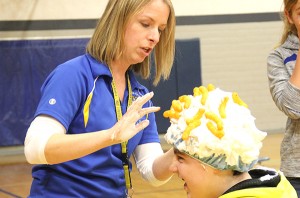 The queen contestants opened up wrapped flowers. The student who received the yellow flowers was chosen as queen.

Jacyln Weitzel, a senior, was chosen as queen. She has been in FFA for three years.

The chapter has had a good year, according to adviser Angie James. Senior and chapter president Sam Johnson was elected a president of Region VII for next year. In the role of Region VII president, Johnson will serve the region by making chapter visits and planning leadership rallies to spread the word about agriculture and FFA. 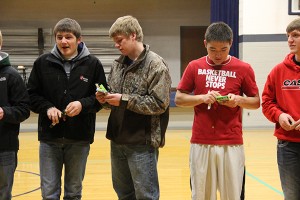 Johnson will be part of the Minnesota State FFA officer team by planning leadership camps for this summer.

Johnson has been in FFA for four years. He participates on the parliamentary procedure and general livestock teams. He also competes in the Farm Bureau Discussion Meet. Johnson said the highlight of his time in FFA has been competing in the national convention with his agriscience project in 2012. He was the first member to compete at nationals from Glenville.

The chapter includes students from seventh through 12th grades, but only students in grades eight through 12 are in FFA. There are about 110 members. FFA week included dress up days and trivia. There will be a dance on Friday.