Funeral services for Beatrice M. Wacholz, 87, of Glenville, will be at 10:30 a.m. Wednesday at the Hayward Lutheran Church. The Rev. Katie Fick will officiate. Interment will be in the Hayward Lutheran Cemetery. Visitation will be from 5 to 7 p.m., Tuesday, at the Bayview/Freeborn Funeral Home and one hour prior to the service at the church on Wednesday. Online condolences are welcome at www.bayviewfuneral.com. 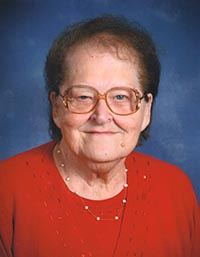 Beatrice Marie Wacholz was born on April 3, 1926, in Freeborn County, the daughter of Louis and Jesse Kycek. She grew up on her parent’s century farm and attended school in rural Hayward. On Oct. 20, 1944, Beatrice was married to Melvin A. Wacholz in Albert Lea. Bea was a member of the Hayward Lutheran Church and the Eagles Auxiliary. She was retired from Mrs. Gerry’s Salads. Bea enjoyed making afghans for family and for church fund-raisers. She also enjoyed making seven-days-of-the-week dish towels. Her favorite pastimes included the Minnesota Twins, listening to old-time music, baking, playing cards and putting puzzles together with Natalie Larson. She enjoyed her pets and spending time with her family and friends. Farming was Bea’s true love.

Bea was preceded in death by her husband, Melvin, her parents Louis and Jesse Kycek, and her brother-in-law Everett Tufte.