Funeral services for Beverly Phillips will be at 10:30 a.m. Monday at St. Mary’s Catholic Church in Geneva. The Rev. Raul Silva will officiate. Visitation will be from 4 to 6 p.m. Sunday at the Bonnerup Funeral Chapel, Albert Lea location, and again one hour prior to the service at the church. Burial will be at a later date. 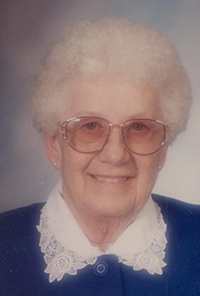 Beverly died surrounded by family at St. John’s Lutheran Community on March 6, 2014. She was 87.

Beverly was born on Dec. 16, 1926, to Ben and Florence (Meader) Fredrickson in Albert Lea. Beverly attended and graduated from Albert Lea High School. After her schooling, she worked various jobs until meeting and marrying her eventual husband.

Beverly was united in marriage to Robert Phillips on Jan. 20, 1946, in Albert Lea. The couple farmed together near Armstrong, and later moved to farm near Geneva in 1957, where they lived the rest of their lives. She was a longtime member of St. Mary’s Catholic Church, where she was an active member and officer of the Altar Society.

Beverly worked as a waitress at the Cottage Café in Geneva for 16 years. She was also a full-time homemaker and helped her husband on the farm. In her free time, Beverly liked to keep her mind sharp by playing crossword puzzles, jigsaw puzzles and playing along with game shows on TV. Beverly was known for her baking, especially pies and cakes. She and Robert would travel to Las Vegas every year in the winter. Beverly was a peacemaker and the backbone of her family. She was the one who held everyone together.