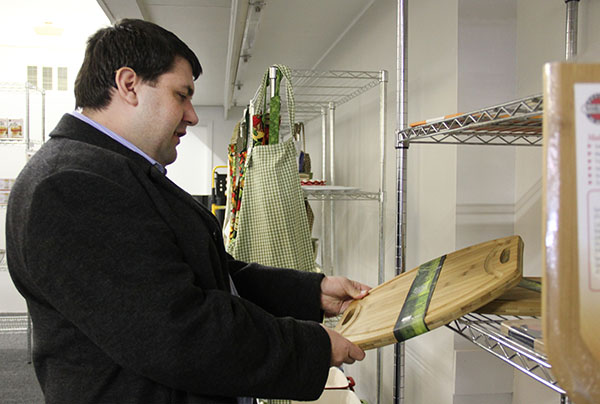 Joel Brown of St. Louis Park checks out a cutting board in the new Copper Kitchen store in downtown Albert Lea on Friday. The store was previously at the Northbridge Mall. – Sarah Stultz/Albert Lea Tribune

Two businesses opened their doors in downtown Albert Lea last week, and a third plans to open in April.

Copper Kitchen, at 212 S. Broadway, moved from the Northbridge Mall in hopes of finding a better location for the store’s demographic, said owner Joey Neely. 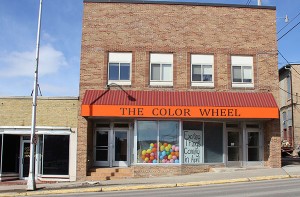 The Color Wheel, owned by Rick and Judy Mummert, will open in early April just west of the intersection of Broadway and Main Street. – Sarah Stultz/Albert Lea Tribune

The store offers high quality kitchen supplies at a reasonable price, he said.

There’s everything from pots, pans, wine racks and kitchen gadgets to bulk spices.

Neely said he is getting into gourmet cooking oils, loose leaf teas and health food products. In the spring, he plans to have produce markets with Oak Knoll Farms, and in the fall he plans to have cuts of natural meats.

Neely said he chose to move downtown in large part because of last summer’s reconstruction.

“The streetscape definitely influenced it,” he said.

The more than $4 million reconstruction included a new street and sidewalk, along with street lights, trees, benches and planters.

City officials have hoped the changes would spur economic development. 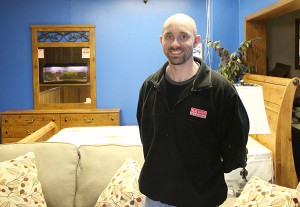 Ryan Glassmaker opened E-Z Own Plus at 115 W. College St. after seeing a need for his business in the community. He owns another store in Owatonna. – Sarah Stultz/Albert Lea Tribune

A second business, E-Z Own Plus, opened next to Kat’s Tats on West College Street.

Owner Ryan Glassmaker, who owns a similar store in Owatonna, said customers can purchase mostly new items through a loan from the company without having to go through credit checks. The customers, in turn, make payments directly to the company.

Glassmaker said he already had some customers in the Albert Lea area and knew the owners of Kat’s Tats on College Street who had extra space in their building.

Though he was not familiar with the downtown reconstruction prior to opening the store, he said he thinks it can only help.

The Color Wheel, owned by Rick and Judy Mummert, will sell furniture — both repurposed and unfinished — along with gifts, candles, pillows and throws.

The building is on Main Street, west of the intersection with Broadway. It features a new brightly colored awning. 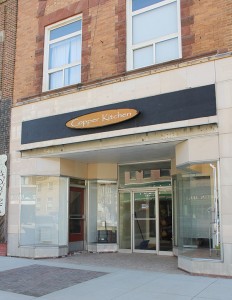 Rick said Judy has been an interior decorative painter for 20 years and did a lot of work with Albert Lea Paint and Glass, the former occupant of the building.

“We’re very familiar with the building and thought it would roll right along with what we wanted to do,” he said.

They hope to open their doors April 3 and plan to be open Thursdays, Fridays and Saturdays and by appointment.

Their daughters Kristen Bergale and Shawna Soper will also help.

“It will be a family business,” Rick said.

Downtown Albert Lea has also seen the opening of Dollar General in the former Snyder Drug building and a small collectibles shop on Clark Street.

“It’s nice to see the downtown get rejuvenated,” Rick said.