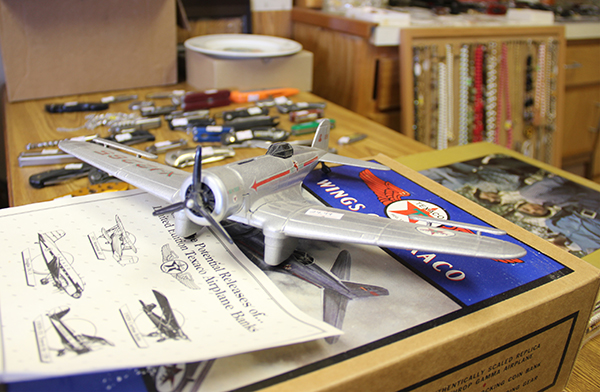 This model airplane was one of several items for sale in Pick & Dig Treasures on Saturday on Clark Street. The business, which offers antiques and collectibles, opened a week ago. – Sarah Stultz/Albert Lea Tribune

An Albert Lea man has taken a hobby and turned it into a business.

Lewis said he has enjoyed going to estate sales, flea markets and yard sales for several years, and he also buys items wholesale.

“I’ve accumulated so much stuff, I just decided I’m going to open up a business,” he said. “I love the idea of repurposed items.” 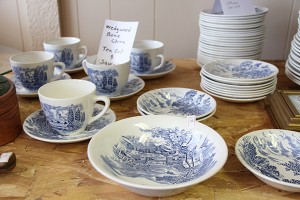 Lewis moved back to Albert Lea about six months ago after he was laid off from a job in Wisconsin. He said he decided to open up his own antiques and collectibles business so he could be more self-sufficient and not have to rely on another company for a job.

He lived in Albert Lea in the mid-1990s and managed Taco John’s.

Some of the goods in the small one-room shop on Saturday were pocket knives, dishes, porcelain dolls, costume jewelry and collectible bells, to name a few. There were also electronics, including CD players and an antique radio.

“There’s really not a lot I won’t deal with,” he said, noting he will buy items from people after estate sales or other sales.

While some of the items will be sold in the store, others will be sold online through eBay. He said he has sold nine cars online. He plans to start a Facebook page.

On Saturday, he intended to put online a collection of records by The Monkees.

Though there will be prices on each of the items in the shop, he encouraged people to make offers. Bartering is welcomed. 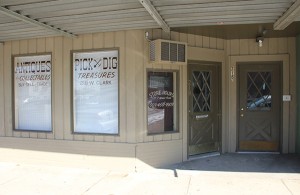 “That’s how I’m going to set myself aside from everyone else,” he said.

Open only one week so far, Lewis said he has been pleased with the customers who have come in.

“You never know what you’re going to find when you come in here,” he said.

Pick & Dig Treasures is open from 11 a.m. to 7 p.m. Mondays through Fridays. The store is across the street from the Freeborn County Department of Human Services building.