The Iowa Division of Criminal Investigation is refusing to release records in a Worth County case in which a man died after being stunned with a Taser at least four times by law enforcement officers. 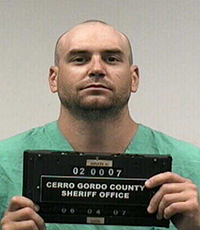 All officers involved in the Sept. 22 tasings were cleared of wrongdoing in December by Worth County Attorney Jeffrey Greve.

But Greve told the Register in December that he neither reviewed any records nor conducted any interviews before concluding that the officers were justified in using the Tasers on Michael Zubrod.

The DCI initially denied the Register’s request to view specific records in the case — including Taser records that show the length of time the 50,000-volt jolts are deployed — saying the records were part of an ongoing investigation.

Iowa law has frequently been interpreted to mean that public records used as part of an investigation are released at its conclusion.

The Register repeated its request for the Zubrod records Dec. 16, after the investigation had concluded, when Greve determined that the actions of three Worth County deputies at the scene were justified. The Register also made the same public records request to Worth County Sheriff Jay Langenbau, who has not responded to the request or to requests for an interview about the case.

Jeff Peterzalek, an assistant attorney general who advises the DCI, said Monday that his interpretation of the law is that public records may continue to be kept secret after an investigation ends.

Peterzalek denied the DCI or attorney general’s office has a blanket policy to keep public records secret that were in some way used in the process of an investigation.

Peterzalek said that releasing documents could be burdensome for agencies like the DCI because of the hundreds of requests the agency receives every year and that “you have to treat everyone the same.” He also indicated other law enforcement agencies would be less likely to work with the DCI if it made records available to the public.

“If every time they gather these materials, whether they’re witness statements or Taser reports, and it’s automatically turned over in response to a public records request, that would have a tremendous chilling effect on the ability of the DCI to do what the DCI does,” Peterzalek said.

If applied broadly, that means that any public record a law enforcement agency claims to be part of any investigation can be forever shrouded in secrecy.

Open records advocate and retired Drake journalism professor Herb Strentz terms that interpretation a “black hole” that twists the law’s language and subverts Iowa’s goal for transparent government. He noted an ongoing case where a state employee was caught on video allegedly slamming a teenage girl’s head into a wall at the Iowa Juvenile Home in Toledo. The attorney general’s office has so far kept that video from the public, arguing in part that the security camera footage of the alleged abuse is part of a medical or treatment record.

“It appears in at least a couple of recent cases, that they’re just trying to protect public employees and public officials from embarrassment and from being held accountable for their actions,” Strentz said.

Zubrod, 39, died shortly after the Sept. 22 incident. Authorities say he was beating his girlfriend with a hammer and had attacked officers who responded to the scene. His death was ruled a homicide by the Iowa Medical Examiner, who said the official cause of death was a heart problem following an altercation with law enforcement while “in the setting of acute methamphetamine intoxication.”

The DCI did not provide a response to the Dec. 16 records request until Feb. 28, after the Register contacted the Iowa Public Information Board about the delinquent response. The DCI on Friday did provide previously undisclosed information considered to be part of the immediate facts and circumstances of the case.

Among the new information: The revised written narrative shows Zubrod was stunned at least four times by two officers.

But the specific written statements of the officers and the actual deployment records created by the Tasers — information the Register has obtained in about a dozen other cases — remain secret.

Advocates of greater restrictions on Taser use cite studies that show multiple tasings and longer shocks escalate the likelihood of injury or death, particularly for people who have other medical issues.

The revised narrative released Feb. 28 by the DCI said that the first tase had “little to no effect” on Zubrod.

The device was used at least three more times for an unknown amount of time before Zubrod stopped breathing, the revised narrative shows.

The DCI has also declined to release records of the July 22 death of Thomas Martinez Jr., who was tased by a Coralville police officer after he had mini seizures as officers were dealing with him. Martinez Jr. became brain dead and died shortly after the incident. That investigation is ongoing.