The Freeborn National Bank and Jacobson Apartments buildings are one step closer to having a developer.

The Albert Lea City Council on Monday unanimously approved a predevelopment agreement with Cohen-Esrey of Overland Park, Kan., for the buildings. 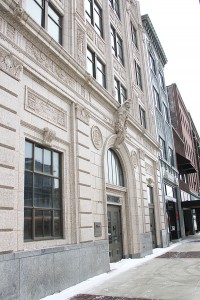 Plans call for a mixed-use development, including residential apartments on the upper three floors. What will go on the main level has not been decided but will allow for public use, said City Manager Chad Adams. He said there have been preliminary discussions with a first-floor tenant.

“We are so excited about this opportunity and are so grateful you have entrusted us with the opportunity to redevelop a very special city asset that the community has obviously supported through tax dollars,” said Clint Jayne, development partner with Cohen-Esrey.

The buildings are on the southeast corner of Broadway and East William Street.

Jayne said he looks forward to negotiations with the city during the coming months and noted city staff have been “refreshing” to work with.

He said if all goes according to schedule, the City Council and his company could approve a final development agreement before the end of the year, with construction to begin in January or February 2015. The buildings could potentially open in September or October 2015.

“I’m not a member of your community, but I’m excited for your community,” Jayne said. “It’s an extraordinary building. It’s in great shape, and we are thrilled at the condition the building is in.”

The Freeborn National Bank was built in 1922. It was originally constructed as a bank on the first floor and medical and professional offices in the upper floors. The Jacobson Apartments’ first two floors were constructed in 1888, and the two upper floors were added in 1923. The buildings share a staircase and elevator.

The two buildings have been under city ownership since 1998.

Sixth Ward Councilor Al “Minnow” Brooks, who was on the council when the city purchased the building, said it was to the point where the city was either going to buy the building or knock it down.

City officials for years have hoped the buildings would play a role in revitalizing Albert Lea’s downtown.

In 2007, the city spent about $2 million to restore the exterior of the bank building, including tuckpointing, a new roof, a skylight and new water, sewer and electrical service to the buildings, among other improvements. Inside, crews have cleaned out asbestos, filled in the basement and taken out a majority of the plumbing.

Prairie Wind Coffee, on the first floor of the Jacobson building, would stay at its present location, Adams noted.

Jayne said the city’s investment in the exterior makes the job easier for a developer,  and he commended the community for its wisdom in saving the building. He said he plans to use historic tax credits for the project.

“I think the community will be grateful,” he said.

Adams said though the city has worked with other developers on the project, he is optimistic about Cohen-Esrey.

Third Ward Councilor George Marin thanked Jayne for being interested in the community.

“You are carrying a huge part of the history of this community,” Marin said. “All eyes will be on you, as on us.”