District 27A candidate says he will likely run for office again 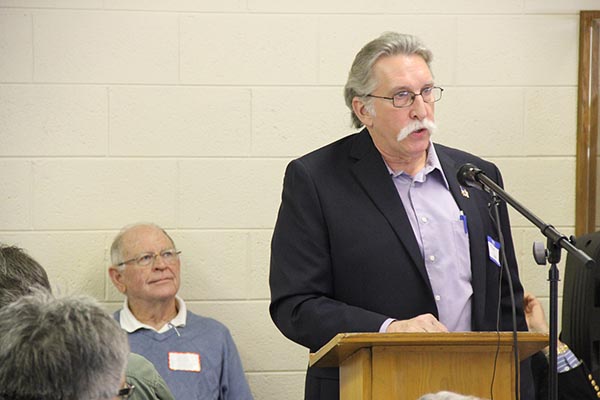 House District 27A candidate Milan Hart speaks Saturday at the Republican nominating convention in Geneva. Hart, who lost his federal firearms dealer license a year ago, shared his views on many issues other than the Second Amendment. – Tim Engstrom/Albert Lea Tribune

At the House District 27A Republican convention in Geneva, he failed to gain the party endorsement to be the state representative for District 27A; however, he likes politics and intends to run again for elective office. 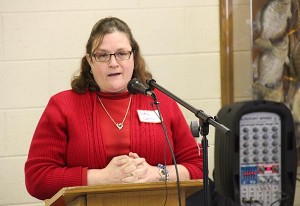 “I think there’s a place for me out there,” he said.

Hart said he wasn’t disappointed with the results of the convention in Geneva. He plans to support nominee Peggy Bennett, who won 65-20.

Hart plans to attend the GOP’s 1st Congressional District convention this Saturday at Southwest Middle School. It determines which candidate will face incumbent Democrat Tim Walz. The three vying for the nomination are hospital account manager Aaron Miller of Byron, Blue Earth businessman Jim Hagedorn and Rochester state Rep. Mike Benson. The convention starts at 9:30 a.m. and could end by 4 p.m. or go into the early morning of the next day, depending how long it takes to endorse a nominee. 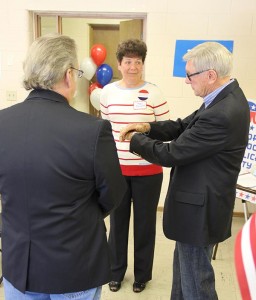 Hart said he wasn’t disappointed by the results at the convention in Geneva. He said he proved he was not a one-issue candidate. Many believed he was running, he said, on Second Amendment rights following the loss of his federal firearms license in March of last year.

On Saturday, he spoke about taxes being too high, how to get unemployed people back to work, why the proposed hike to minimum wage is too high, opposition to the Minnesota Vikings stadium, opposition to altering Sunday liquor laws and how he is pro-life on the issue of abortion.

He said Republicans would get a candidate not afraid to fight on their behalf. He never mentioned Second Amendment rights in his speech.

“They no longer think I am a one-issue candidate,” Hart said.

Losing his firearms license impacted how he can help people, he said. Being in elective office is a way he could help people.

“If we’re going to complain about government, get involved so we can change it,” Hart said.

One supporter who seconded Hart’s nomination Saturday was businesswoman Kathy Sabinish. She said she has known Hart for 28 years. She said he worked at a foundry at the same time as opening up a business, which she said shows he is a hard worker.

“We all know Milan supports the Second Amendment,” Sabinish said. “We all should know we can’t let the government take anything away from us.”

“He is a good candidate and a strong supporter of everybody in this room,” he said.