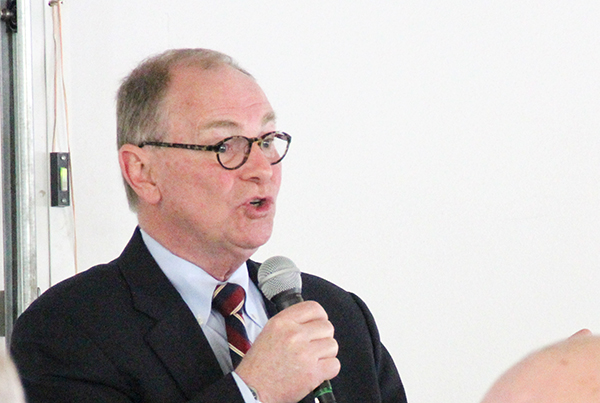 Miller was the guest speaker at the ninth annual Albert Lea-Freeborn County Chamber of Commerce Agriculture Luncheon on Tuesday. He spoke about the relationship between ethanol and economic growth to about 75 people at the yearly luncheon. Growth Energy is  a trade association representing the interests of the ethanol industry. 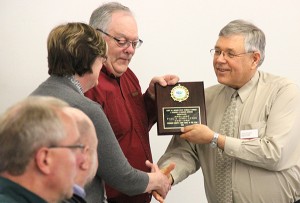 The Farm Family of the Year was announced at the Ag Luncheon at the Fairlane Building of the Freeborn County Fairgrounds. – Tiffany Krupke/Albert Lea Tribune

The industry is responsible for adding 400,000 U.S. jobs and nearly $40 billion to the gross domestic product each year, he said.

“This industry is your industry,” Miller said. “If we are going to succeed, we need to find better ways to come together.”

Miller, a Washington native, farmed for 20 years. He joined the crowd in honoring the Farm Family of the Year. “I used to farm so I know how much work goes into maintaining a family farm,” Miller said.

Paul and Linda Lynne of rural Hartland received the award this year. The couple farms 320 acres of land for corn and soybeans. They live on a farm that has been in the Lynne name for five generations.

Linda took the microphone after accepting the award with her husband and said she loves Freeborn County.

“Paul really deserves this award,” Linda said with a smile. “He has been farming his entire life.”

The Farm Family of the Year award has been given out every year since 1980. The luncheon honors one family each year and is a chance for locals to discuss local agriculture.