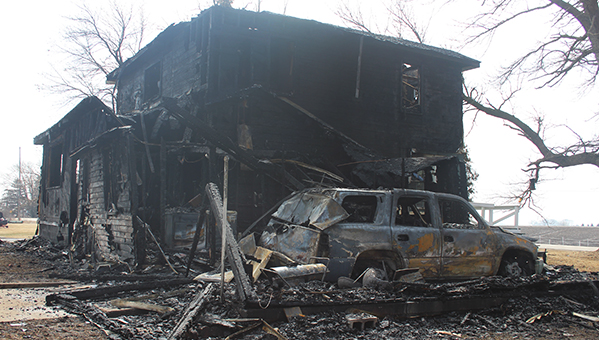 GENEVA — A rural Geneva family is without a home today after a fire early this morning.

Preliminary investigation shows the blaze, at 81030 320th St., started with a charcoal grill stored in the garage, according to the Freeborn County Sheriff’s Office. The home is near the intersection of Freeborn County roads 26 and 35. 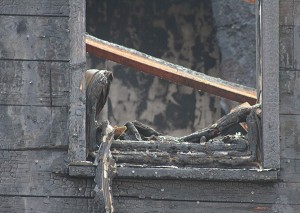 A window is charred on the side of 81030 320th Ave., near Geneva, Monday afternoon after a blaze at the residence earlier that morning. — Sarah Stultz/Albert Lea Tribune

The grill had reportedly been used earlier Sunday and appears to have accidentally ignited in the garage, said Freeborn County Sheriff’s Office detective Chuck Malepsy.

Malepsy said the home was owned by Gregory and Maureen Riley.

The Rileys were reportedly home when the fire began but made it safely outside. They called authorities at 1:09 a.m.

Malepsy said when firefighters arrived the garage was fully engulfed and moving into the rest of the house.

He said the family is being assisted by the Freeborn-Mower chapter of the American Red Cross.

This is the second home lost to fire in Freeborn County in the last week. 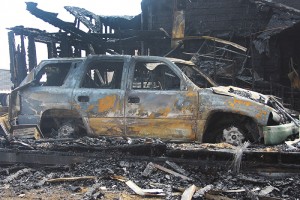 A vehicle stands in what appears to have been the garage at 81030 320th St., near Geneva, Monday afternoon. — Sarah Stultz/Albert Lea Tribune

On Tuesday, a blaze destroyed a home at 21751 620th Ave., in rural Alden, owned by Bruce and Wendy Niebuhr.

The Niebuhrs were visiting their daughter about two miles away when they were called by a friend on the Alden Fire Department.

Firefighters from nine departments battled that blaze, but the house was a total loss.

The state fire marshal was at the  scene Friday.

A cause has not yet been released.