Funeral services for Floyd R. Hinkley will be at 2 p.m. on Monday at the Bonnerup Funeral Service, Albert Lea chapel. The Rev. Julie Schaffer will officiate. Visitation will be one hour prior to the service. Interment will be at a later date at the Freeborn Cemetery, Freeborn. 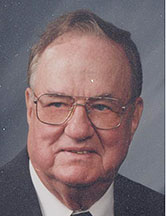 Floyd R. Hinkley was born on July 30, 1914, to George W. and Julia (Jacobson) Hinkley in Freeborn.Floyd was a lifelong resident of Freeborn, which is where he attended and graduated high school. After his schooling, Floyd became a founding partner of Hinkley Chevrolet. He worked there for many years. Prior to his retirement, Floyd worked for Freeborn County Human Services for five years.

Floyd is preceded in death by his parents; wife, Doris; sister, Iva Proehl; brothers, Irving, Raymond and Vernon; as well as one grandson and one great-great grandson.